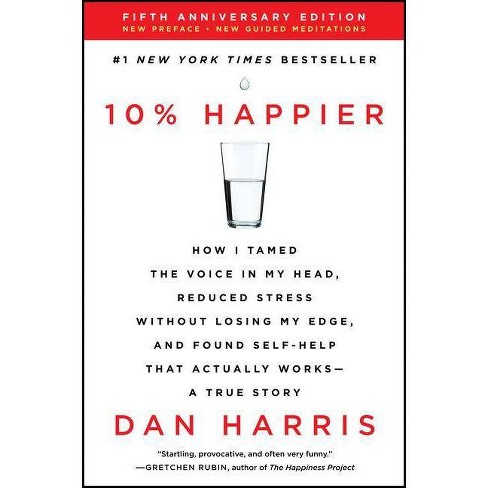 "A hardcover edition of this book was published in 2014 by It Books, an imprint of HarperCollins Publishers."--Title page verso.

I wrote a memoir about a fidgety, skeptical newsman who reluctantly becomes a meditator to deal with his issues - and in the process of publishing it, I occasionally, to my embarrassment, found myself failing to practice what I preach. I was kind of like a dog that soils the rug, and the universe kept shoving my face into it.

In 2014, Dan Harris published his memoir 10% Happier. The book--which describes his reluctant embrace of meditation after a drug problem, an on-air freak-out, and an unplanned spiritual journey--became an instant bestseller and Dan, to his own surprise, became a public evangelist for mindfulness. Hoist on My Own Petard is the story of what happens to Dan Harris after the runaway success of his memoir and the lessons he had to (re)learn in the process.

After having a nationally televised panic attack, Dan Harris knew he had to make some changes. A lifelong nonbeliever, he found himself on a bizarre adventure involving a disgraced pastor, a mysterious self-help guru, and a gaggle of brain scientists. Eventually, Harris realized that the source of his problems was the very thing he always thought was his greatest asset: the incessant, insatiable voice in his head, which had propelled him through the ranks of a hypercompetitive business, but had also led him to make the profoundly stupid decisions that provoked his on-air freak-out.

Eventually Harris stumbled upon an effective way to rein in that voice, something he always assumed to be either impossible or useless: meditation, a tool that research suggests can do everything from lower your blood pressure to essentially rewire your brain. 10% Happier takes readers on a ride from the outer reaches of neuroscience to the inner sanctum of network news to the bizarre fringes of America's spiritual scene, and leaves them with a takeaway that could actually change their lives.

This fifth anniversary edition features a new preface by Harris and new guided meditations from his favorite teachers, including Joseph Goldstein and Sharon Salzberg.

"A self-help guide even skeptics will embrace . . . Harris crushes stereotypes about meditation and recounts how it slashed his stress and quieted his anxious mind."--Parade

"In 10% Happier, Dan Harris describes in fascinating detail the stresses of working as a news correspondent and the relief he has found through the practice of meditation. This is an extremely brave, funny, and insightful book. Every ambitious person should read it."--Sam Harris, author of The End of Faith

A compellingly honest, delightfully interesting, and at times heart-warming story of one highly intelligent man's life-changing journey towards a deeper understanding of what makes us our very best selves. As Dan's meditation practice deepens, I look forward to him being at least 11% happier, or more.--Chade-Meng Tan, author of Search Inside Yourself

An enormously smart, clear-eyed, brave-hearted, and quite personal look at the benefits of meditation that offers new insights as to how this ancient practice can help modern lives while avoiding the pitfall of cliché. This is a book that will help people, simply put.--Elizabeth Gilbert, author of Eat, Pray, Love

Startling, provocative, and often very funny . . . [10% HAPPIER] will convince even the most skeptical reader of meditation's potential.--Gretchen Rubin, author of The Happiness Project

The science supporting the health benefits of meditation continues to grow as does the number of Americans who count themselves as practitioners but, it took reading 10% HAPPIER to make me actually want to give it a try.--Richard E. Besser, M.D., Chief Health and Medical Editor, ABC News

This brilliant, humble, funny story shows how one man found a way to navigate the non-stop stresses and demands of modern life and back to humanity by finally learning to sit around doing nothing.--Colin Beavan, author of No Impact Man

10% Happier is a spiritual adventure from a master storyteller. Mindfulness can make you happier. Read this to find out how.--George Stephanopoulos

10% HAPPIER is hands down the best book on meditation for the uninitiated, the skeptical, or the merely curious. . . . an insightful, engaging, and hilarious tour of the mind's darker corners and what we can do to find a bit of peace.--Daniel Goleman, author of Emotional Intelligence and Focus
If the item details above aren’t accurate or complete, we want to know about it. Report incorrect product info.