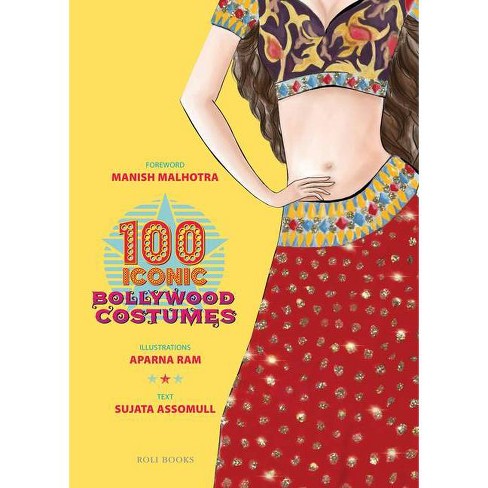 - 100 Iconic Bollywood Costumes is a definitive guide to these colorful silver screen outfits and more- Beautifully illustrated and a must-buy for fans and scholars of women's fashion and Bollywood cinema- Full of insider know-how from designer legends such as Manish Malhotra 100 Iconic Bollywood Costumes is a celebration of fashion in Indian cinema, studded with beautiful illustrations of India's most enduring glam icons. It pays tribute to the colorful silver screen looks that have not only come to define their lms and actresses, but have also shaped the way millions of Indian women view style: Madhubala's classic Anarkali in Mughal-e-Azam (1960), Kajol's tomboy chic in Kuch Kuch Hota Hai (1998), Kareena Kapoor's game-changing Patialas in Jab We Met (2007), and many more. Packed with insider know-how on the creative processes behind these influential costumes - from designer legends such as Manish Malhotra to the stylish performers themselves - 100 Iconic Bollywood Costumes is a must-have for both fans and scholars of women's fashion, Bollywood cinema, and the quintessential quirks of modern Indian culture.

Sujata Assomull is a fashion journalist. She was the launch editor of Harper's Bazaar India, has worked at ELLE India and Indian Express, and served as communications director at Gucci and Jimmy Choo in India. She is currently the consulting fashion editor at Dubai's Khaleej Times and a contributing editor to Vogue India. Aparna Ram is a London-based fashion illustrator, whose work has received attention from leading Indian costume designers. She is the founder of Cuckoo for Colour, her art and design venture.
If the item details above aren’t accurate or complete, we want to know about it. Report incorrect product info.