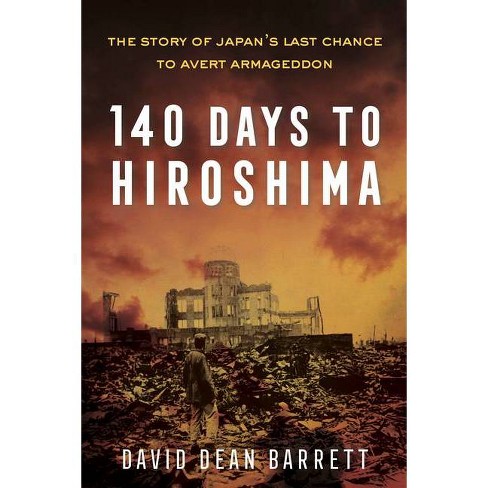 "Barrett drops you right into the situation rooms with the most powerful figures in the world during the most critical days of the 20th century--the climax of World War II. Innovatively structured, highly detailed, and well-documented, this book will draw you in from page one."
--A.J. Baime, New York Times bestselling author of The Accidental President: Harry S. Truman and the Four Months that Changed the World "140 Days to Hiroshima is a deeply researched and carefully nuanced narrative, especially powerful on US and Japanese decision-making throughout 1945, culminating in Japan's surrender. David Dean Barrett shrewdly integrates essential military realities with the potent domestic cross currents affecting leaders on both sides of the Pacific."
-- Richard B. Frank, author of Downfall: The End of the Imperial Japanese Empire "A detailed, almost day-by-day account of political debates that preceded Japan's surrender in World War II. . . . A nonrevisionist, reflective, opinionated, intensely researched WWII history."
--Kirkus Reviews "Historian Barrett debuts with an impressively researched chronicle of the months leading up to the atomic bombing of Hiroshima.... By capturing both sides of the conflict, Barrett generates drama despite the inevitability of the book's conclusion. Military history buffs will be riveted."
--Publishers Weekly "Reading like a Tom Clancy thriller, David Dean Barrett's 140 Days to Hiroshima is a gripping, day-by-day account of the run-up to, and the aftermath of, one of the most cataclysmic and world-changing events of all time--the atomic bombing of two Japanese cities. Here's the inside story of why the Japanese high command was so determined to plunge ahead toward defeat in a war they could not possibly win."
-- Flint Whitlock, editor of WWII Quarterly magazine and co-author of The Depths of Courage: American Submariners at War with Japan "David Dean Barrett's detailing of the ruling militarists' iron grip on Japanese decision-making--even after two atomic bombs and the Soviet entry into the Pacific War--should finally put to rest any notion that the Japanese were trying to surrender. As 140 Days to Hiroshima clearly shows, it was the bomb that influenced the Emperor to make his historic interventions forcing his government to finally surrender. Yet even then, Japan's military almost derailed Hirohito's decree to end the war."
--D. M. Giangreco, author of Hell to Pay: Operation Downfall and the Invasion of Japan, 1945-1947 "140 Days to Hiroshima utterly destroys the revisionist fictions that Japan would have surrendered months earlier if only they had been notified that they could retain their emperor, and that Truman dropped the bombs to awe the Soviets rather than to defeat an already-defeated Japan. It is an important book and a gripping read."
--Robert James Maddox, author of Weapons for Victory: The Hiroshima Decision, and editor of Hiroshima in History "David Dean Barrett's 140 Days to Hiroshima offers a comprehensive and definitive account of the events and decision making that culminated in the American use of atomic weapons against Japan in August 1945. Barrett's meticulous and balanced review of the evidence makes it clear that the circumstances at the time justify Truman's decision to use atomic weapons. He convincingly demonstrates that the Japanese government was not prepared to surrender on terms acceptable to the United States and its allies prior to the attacks on Hiroshima and Nagasaki, that President Truman and his top advisors understood this, and that Truman's sole objective in resorting to atomic weapons was to end the war as soon as possible and thereby save American lives. Barrett further demonstrates that there were estimates for American casualties in the projected invasion of Japan that exceeded 500,000 and that the use of atomic bombs against Hiroshima and Nagasaki was the key factor in bringing about Japan's surrender."
-- Michael Kort, professor of social science at Boston University and author of The Columbia Guide to Hiroshima and the Bomb "The interplay between the leaders of Japan and America during the conclusion of the Pacific War--when some leaders in Japan did their best to lead their country to surrender--is a narrative of human drama that still challenges minds around the world. David Dean Barrett's work is an important contribution to an in-depth understanding."
-- Kazuhiko Tōgō, professor at Kyoto Sangyo University; former Ambassador of Japan to the Netherlands; grandson of former Japanese Foreign Minister Shigenori Tōgō
If the item details above aren’t accurate or complete, we want to know about it. Report incorrect product info.