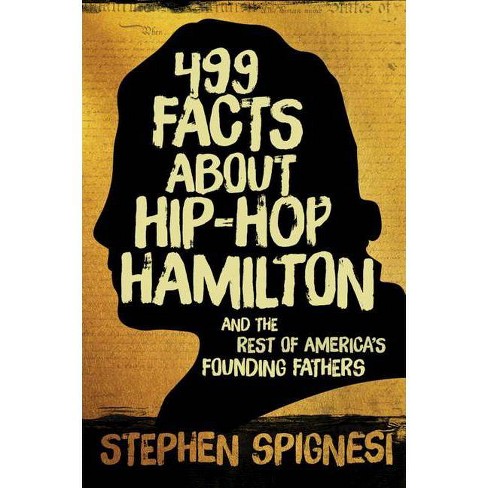 $7.99
MSRP$16.99
no reviews yet
be the first!be the first! ratings
Shipping
Free standard shipping with RedCard
Help us improve this page

If you love Lin Manuel Miranda's Hamilton, or the books of Ron Chernow and David McCullough, then dig into these facts about Alexander Hamilton, George Washington, Thomas Jefferson, Ben Franklin and the rest of the founding fathers. America has fallen in love again with Alexander Hamilton and the Founding Fathers again. Here is a popping fresh collection of little-known facts and surprising trivia surrounding the American Revolution and our forefathers - from those you'd expect (George Washington, Thomas Jefferson, Ben Franklin, and Hamilton, of course) to those you may never have heard of, but you probably should have (who the heck was Rufus King?): Alexander Hamilton was born on foreign soil and became an American hero - the founder of the U.S. Mint and the U.S. Coast Guard. The naval communication book he wrote was still being used by the US Navy and Coast Guard through the Cuban Missile Crisis. Roger Sherman (of Connecticut) was one of only two Founding Fathers who signed the three bulwark documents of our republic: The Declaration of Independence, the Articles of the Confederation, and the Constitution. (Give props to this guy.) By the time he was thirty, George Washington had had smallpox, pleurisy, dysentery, and malaria. Even if they weren't in "The Room Where It Happens," Readers will be left with a greater appreciation and deeper respect for these human beings who were just trying to accomplish the incredible: create the greatest nation in history.
If the item details above aren’t accurate or complete, we want to know about it. Report incorrect product info.