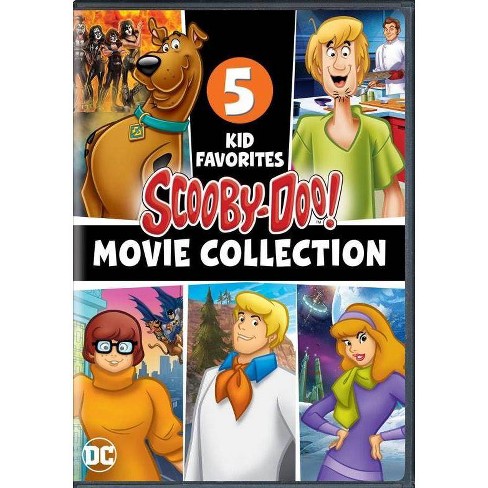 SCOOBY-DOO! MOON MONSTER MADNESS Blast off for an epic, otherworldly adventure in this all-new original movie! Scooby-Doo, Shaggy, Fred, Daphne and Velma are off to space in billionaire Sly Baron's brand new ship. It's all gravity-free fun until a mysterious alien forces a landing…on the dark side of the moon! Journey to the outer limits with Scooby-Doo to unravel this alien mystery!

SCOOBY-DOO! & KISS: ROCK & ROLL MYSTERY Get ready to rock! We join the gang at an all-things-KISS theme park as they investigate a series of strange hauntings. With help from KISS, they discover that the Crimson Witch has returned to summon The Destroyer from the alternate dimension of KISSteria! The evil duo's ghastly plan: to destroy the Earth! Tune in for thunderous, heavy FUN!

SCOOBY-DOO! AND WWE CURSE OF THE SPEED DEMON Start your engines! Scooby-Doo, Shaggy and the gang team up with WWE superstars in this all-new original movie! A phantom racer is causing chaos at an off-road competition. It's up to Scooby-Doo, Shaggy and their new partner, The Undertaker, to solve the mystery, along with other WWE superstars, such as Triple H, Paige and Sheamus.

SCOOBY-DOO! & BATMAN: THE BRAVE AND THE BOLD After an unsolved case from Batman's past comes back to haunt him, and the mysterious Crimson Cloak threatens to take over Gotham City, Batman recruits Mystery Inc. to help crack the case. Will their teamwork be enough to solve the mystery and foil the plans of the most dangerous rogue villains the world has ever known?

SCOOBY-DOO! AND THE GOURMET GHOST Get ready for a five-star meal of mystery with Scooby-Doo and the gang when they meet Fred's uncle, world-famous chef Bobby Flay. When a Red Ghost haunts their resort, the Mystery Inc. gang teams up with Bobby and his culinary pal Giada De Laurentiis to dig in for clues and serve up juicy justice, tasty laughs and delicious plot twists and turns.