A Bag of Marbles - by Joseph Joffo (Paperback) 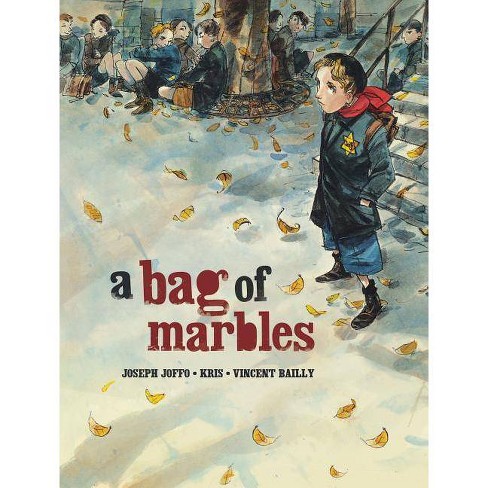 In 1941, ten-year-old Joseph Joffo and his older brother, Maurice, must hide their Jewish heritage and undertake a long and dangerous journey from Nazi-occupied Paris to reach their other brothers in the free zone.

In 1941 in occupied Paris, brothers Maurice and Joseph play a last game of marbles before running home to their father's barbershop. This is the day that will change their lives forever. With the German occupation threatening their family's safety, the boys' parents decide Maurice and Joseph must disguise themselves and flee to their older brothers in the free zone.

Surviving the long journey will take every scrap of ingenuity and courage they can muster. And if they hope to elude the Nazis, they must never, under any circumstances, admit to being Jewish.

The boys travel by train, by ferry, and on foot, facing threats from strangers and receiving help from unexpected quarters. Along the way they must adapt to the unfamiliar world beyond their city--and find a way to be true to themselves even as they conceal their identities.

Based on an autobiographical novel by Joseph Joffo and adapted with the author's input, this true story offers a harrowing but inspiring glimpse of a childhood cut short.

One almost never hears the sentence, 'I'm reading a Holocaust book for fun, ' but parts of this memoir of French Jews fleeing the Occupation read like an adventure story.
No one would describe this book as a thriller, but it has false identities and escapes through the forest in the dark of night. Ten-year-old Joseph even looks a bit like Tintin, with his skinny frame and blond hair. For a brief portion of the war, he spends his days eating pastries and watching the same movie over and over again. (Bailly's pictures of the free zone in Marseille are gorgeous.) But the memoir is always a moment away from tragedy. In real life, Joseph Joffo's father died in a concentration camp, and the last image in the story highlights his framed, sepia-toned photo. A few scenes are deeply poignant. Early in the book, Joseph is told to deny his Jewish identity, and he asks, 'What is...a Jew?' His father says, 'Well, it's kind of embarrassing, but...I don't really know.' At the time, Joffo probably didn't think he was living an adventure story. He had to flee from one zone of France to another, hoping he wouldn't be caught by the Nazis.
For the 128 pages of this graphic novel, though, readers can pretend this is an awfully big adventure, and they'll keep flipping pages, hoping it doesn't turn into another story altogether. --Kirkus Reviews

Ten-years-old at the start of the story, Joffo recalls his Jewish family planning their escape from Occupied France during World War II. Tension runs through the story as he and his brother set off on the long journey to the Free Zone, where they plan to meet up with their older brothers. Along the way the boys must hide their Jewish identity, evade train security, and find a passeur, or guide, to take them past guard posts and fences to safe territory. Readers are never allowed to forget the danger the boys are in as they encounter friends and foes and attempt to discern whom they can trust. Bailly's painterly artwork is well suited to the compelling, well-told narrative. Unfortunately, it is crowded on dense, dialogue-heavy and tightly packed pages, preventing readers to view more closely the detailed, layered artwork. This title will appeal to readers interested in memoirs about World War II and has enough action to hold their attention. It's a welcome addition to graphic-novel collections, but layout problems preclude it from being a must-have. --School Library Journal

The opening scene in this graphic novel (adapted from Joffo's 1973 adult memoir of the same name) features the author at ten years old, crying over a lost marble. But for Jews in Nazi-occupied Paris, innocence is fleeting: two years later, the now-world-weary boy has much more to cry about as he observes, 'The Nazis haven't taken my life away yet, but they've stolen my childhood.' During those two years young Jo and his brother Maurice manage to stay one step ahead of the Germans, scurrying from one place to the next as they travel through southern France, hoping to reunite with their two grown brothers near the Italian border. Despite the tragedy and danger inherent in the wartime setting, it's not all gloom and doom. Jo and Maurice are likable, impressively resourceful boys--no matter the city or town, the brothers forge fast friendships, flashing impish grins as they plan their latest scheme. The book's relatively busy layout is balanced by Bailly's gorgeously detailed illustrations--one can almost smell the sea air as the brothers bum around the coastal town of Menton. A map of France during the war, a glossary, and an author's note are included in this welcome addition to the rich Holocaust literary canon. --The Horn Book Magazine

This marvelously conceived and executed graphic memoir, adapted from Joffo's 1973 book of the same name, tells the story of four Jewish brothers who spend WWII hiding from Nazi soldiers in Vichy France. When the Germans arrive, the boys' father sends them off in pairs to separate destinations, instructing them never to reveal their Jewish identities to anyone. The two younger boys, Jo (the author) and Maurice, travel from city to city, always one step ahead of arrest. Sometimes they're saved by decent French citizens ('Oh, the children are with me, ' says a priest, casually). More often, desperation makes the boys quick-witted, as when they persuade an interrogator that what appears to be circumcision is the result of surgery for adhesions. The brothers' courage, Joffo makes clear in the story's early pages, has its source in their father's valor. He dies in the camps, but his wife and sons survive. Bailly's artwork carries much of the story's emotional impact--every character is drawn with care, and every scene is crammed with atmospheric detail. Not to be missed. --starred, Publishers Weekly