A Bend in the Stars - by Rachel Barenbaum 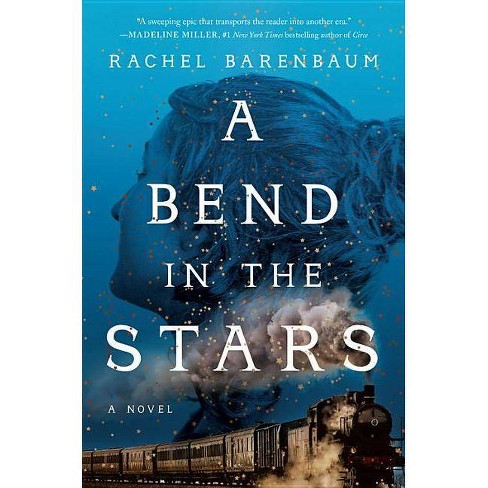 "An epic love story, and heart-pounding journey across WWI-era Russia, about a brilliant young scientist racing against Einstein to solve one of the greatest mysteries of the universe"--

All the Light We Cannot See meets The Nightingale in this literary WWI-era novel and epic love story of a brilliant young doctor who races against Einstein to solve one of the universe's great mysteries.
In Russia, in the summer of 1914, as war with Germany looms and the Czar's army tightens its grip on the local Jewish community, Miri Abramov and her brilliant physicist brother, Vanya, are facing an impossible decision. Since their parents drowned fleeing to America, Miri and Vanya have been raised by their babushka, a famous matchmaker who has taught them to protect themselves at all costs: to fight, to kill if necessary, and always to have an escape plan. But now, with fierce, headstrong Miri on the verge of becoming one of Russia's only female surgeons, and Vanya hoping to solve the final puzzles of Einstein's elusive theory of relativity, can they bear to leave the homeland that has given them so much?
Before they have time to make their choice, war is declared and Vanya goes missing, along with Miri's fiancé. Miri braves the firing squad to go looking for them both. As the eclipse that will change history darkens skies across Russia, not only the safety of Miri's own family but the future of science itself hangs in the balance.
Grounded in real history -- and inspired by the solar eclipse of 1914 -- A Bend in the Stars offers a heart-stopping account of modern science's greatest race amidst the chaos of World War I, and a love story as epic as the railways crossing Russia.

A Bend in the Stars is a vivid and wrenching debut, full not only with the darkness of history but also with hope---a literary saga for fans of The Invisible Bridge and All The Light We Cannot See. Love and war and relativity weave together seamlessly, and we're left understanding that there's more than one way for the universe to bend.--p.p1 {margin: 0.0px 0.0px 0.0px 0.0px; font: 11.0px Helvetica}span.s1 {font-kerning: none}Rebecca Makkai, author of the National Book Award Finalist The Great Believers

A riveting and deftly-plotted novel that leads us through the twisted labyrinths of Riga, hurtles us atop a pile of crates on a train rumbling toward Kiev, and illuminates how the violence of history and the thrill of scientific discovery unfold in startling simultaneity.--Ilana Kurshan, Sami Rohr Prize-winning author of If All The Seas Were Ink

A sweeping epic that transports the reader into another era, even as the struggles of its characters feel powerfully modern and timely.--Madeline Miller, #1 New York Times bestselling author of Circe

A thick, juicy novel packed with history, science, adventure, fully-realized characters, and a race to the 1914 solar eclipse.--Literary North

An epic adventure that spins through rich terrain; several engrossing love stories, including one between remarkable siblings; and a scientific intrigue that pits dark ambition against a passionate love of science...The characters Barenbaum brings to life demonstrate resilience in the face of prejudice, steadfastness in the face of defeat, and the ability to love even when the world has cracked with hate.--Los Angeles Review of Books

Like the best historical fiction, Barenbaum's novel not only shines a light on an overlooked historical moment, but also provides a new lens through which to view our own time...A Bend in the Stars is a thrilling read that sends a chilling message as to how history could repeat itself if we don't heed the lessons of the past.--p.p1 {margin: 0.0px 0.0px 0.0px 0.0px; font: 12.0px 'Times New Roman'}New York Journal of Books

Rachel Barenbaum's A Bend in the Stars is a beautiful thrill ride steeped in the history of Czarist Russia, from its poverty-ridden shtetls to its roaring trains, and the awesome lure of science. This is a book of history rewritten, dreams realized, and justice served---a book about relativity, war, hatred, and the weight of our assumptions and our great loves.--Michelle Hoover, author of The Quickening

Rachel Barenbaum's beautiful historical novel A Bend in the Stars traces the paths of Russian siblings Miri, a doctor, and Vanya, an astronomer, as they crisscross the motherland during a WWI eclipse. If you love Russian novels, smart and elegant fiction, stories about love, war, & loyalty, this one's for you.--Jenna Blum, New York Times bestselling author of Those Who Save Us, Stormchaser, and The Lost Family

This debut that will appeal to fans of All The Light We Cannot See is an epic love story and a tale of scientific discovery.--p.p1 {margin: 0.0px 0.0px 0.0px 0.0px; font: 12.0px 'Times New Roman'}The Globe and Mail, Summer's Best Reads

With the timelessness of a folk tale, the twists and turns of an adventure story, and the pleasures of a science thriller, A Bend in the Stars both fills the reader's heart and keeps it beating fast. This novel's strongly gravitation pull draws you powerfully alongside Miri and Vanya in their harrowing quest, and its emotional payoff makes you never want to let them go.--Christopher Castellani, author of Leading Men

Rachel Barenbaum's debut novel, A Bend In The Stars, was named a New York Times Summer Reading Selection and a Barnes & Noble Discover Great New Writers Selection. It is also a Boston Globe bestseller. Rachel's second novel, The History of Time Travel, is forthcoming from Grand Central (2021).
Rachel is a prolific writer and reviewer for the Los Angeles Review of Books and DeadDarlings. She is a graduate of GrubStreet's Novel Incubator. In a former life she was a hedge fund manager and a spin instructor. She has degrees from Harvard in Business, and Literature and Philosophy. She lives in Hanover, NH with her husband, three children, and dog named Zishe -- after the folk hero who inspires many tales around their dinner table.
If the item details above aren’t accurate or complete, we want to know about it. Report incorrect product info.