A Bright and Blinding Sun - by Marcus Brotherton (Hardcover) 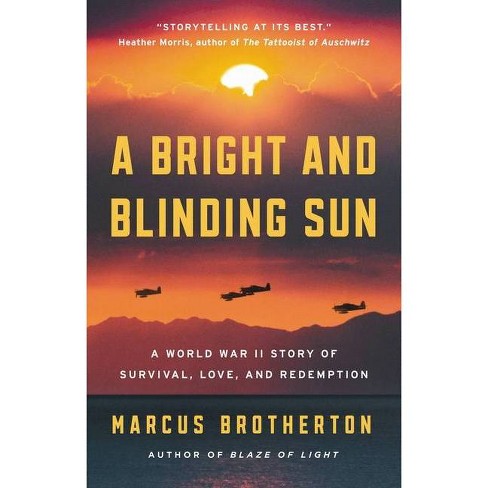 "Joe Johnson Jr. ran away from home at the age of 12, hopping a freight train at the height of the Great Depression. Two years later, he managed to talk his way into the U.S. Army. Seeking freedom and adventure, he was sent to the Philippines. After a misstep with a teenage prostitute, he vowed to right the wrongs he'd done and help the girl have a better life. Yet when the Japanese attacked on December 7, 1941, his hopes of being with the girl had to wait. Joe and his fellow soldiers fought for four brutal months in Bataan and Corregidor, until they were forced to surrender. Joe endured years of horror as a prisoner of war, only dreaming about seeing again the girl he'd come to love"--

From a New York Times bestselling author comes the incredible true story of an underage soldier's first love and loss on the battlefields of Bataan and Corregidor--perfect for fans of The Boy Who Followed His Father into Auschwitz and Unbroken.

Joe Johnson Jr. ran away from home at the age of 12, hopping a freight train at the height of the Great Depression. He managed to talk his way into the U.S. Army two years later. Seeking freedom and adventure, he was sent to the Philippines.

Adrift in spirit, Joe visited a teenage prostitute, and they became unlikely, smitten allies. Yet when the Japanese attacked on December 8, 1941, their hopes of being together had to wait.

Joe and his fellow soldiers fought for four brutal months in Bataan and Corregidor, until they were forced to surrender. The boy endured years of horror as a prisoner of war, only dreaming about seeing again the girl he'd come to love.

This lyrically written and deeply encouraging saga will remind you that every life can be lifted, forgiveness is the patron of restoration, and redemption is available to all.

"Brotherton has done his homework ... this florid account of Johnson's experiences is hard to put down...a good read."--Kirkus

"Full of near-death escapes and unlikely twists of fate, this will appeal to fans of Laura Hillenbrand's Unbroken."--Publishers Weekly

"Superb! A rare and moving narrative, both brutal and compassionate in scope. Marcus Brotherton is a masterful writer, able to channel any voice as he whisks us away on a journey into the past."--Adam Makos, New York Times bestselling author of Spearhead

"A Bright and Blinding Sun is a gripping book, storytelling at its best, with an enduring message. Not only has Marcus Brotherton brilliantly chronicled the life of one boy, but in doing so he has told the story of countless others. With impeccable research, he beautifully educates us to a time and place in history that needs to be remembered and acknowledged for the bravery and resilience of so many, under brutal circumstances. Unreservedly recommended."
--Heather Morris, #1 internationally bestselling author of The Tattooist of Auschwitz

"What Joe Johnson went through as a young man is heart-wrenching and fierce, yet his story needs to be told and remembered as an example of what deeply humane people encountered and overcame during World War II."--Gary Sinise, Actor, Founder Gary Sinise Foundation

"Private Joe Johnson displayed an indomitable spirit throughout his remarkable life. He endured what seemed impossible and came out the other side victorious. Marcus Brotherton always writes a powerful book, and A Bright and Blinding Sun does not disappoint."--Green Beret SFC Ryan Hendrickson, Silver Star recipient. Nationally bestselling author of Tip of the Spear

"Marcus Brotherton has crafted a strong and respected canon of narrative nonfiction books. In particular, he writes beautifully and hauntingly about the paradoxes of war. Humanity and horror mix and mingle in the fray, but in the end good triumphs over evil. Joe Johnson's story is truly a testament that every one of us can overcome the obstacles that we are dealt, and even thrive when the odds are against us."--Sara Vladic, New York Times bestselling author of Indianapolis

Marcus Brotherton is a New York Times bestselling author and coauthor dedicated to writing books that inspire heroics, promote empathy, and encourage noble living. Four of Marcus' books are New York Times bestsellers, five are national bestsellers, four have been optioned for movies, two have received Booklist Starred Reviews, and one is an international bestseller. His books have also appeared on USA Today, Publisher's Weekly, Wall Street Journal, and ECPA bestseller lists. Born in British Columbia, Marcus earned a bachelor's degree from Multnomah University in Portland, Oregon, and a master's degree from Biola University in Los Angeles, where he graduated with high honors. He lives with his wife and their three children in the Pacific Northwest.

We Who Are Alive and Remain - by Marcus Brotherton (Paperback)

Blaze of Light - by Marcus Brotherton

I Breathe Therefore I AM - (I Am) by Marcus Dupuis (Hardcover)

Blaze of Light - by Marcus Brotherton

We Who Are Alive and Remain - by Marcus Brotherton (Paperback)

How to Grow - by Marcus Bridgewater (Hardcover)