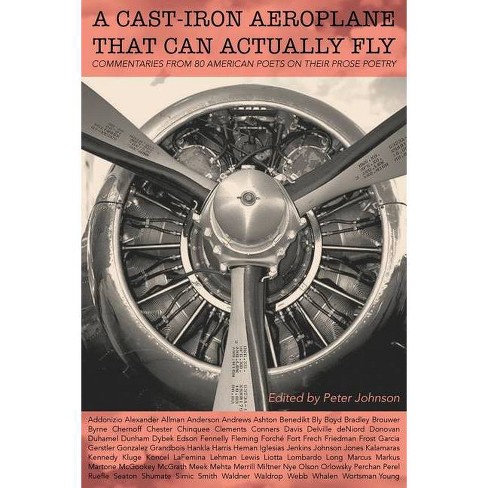 "A Cast-Iron Aeroplane is at once a fun and valuable anthology because of its variety of prose poems and its format--80 poems by 80 poets, with commentaries on the poems by the poets. As the editor Peter Johnson suggests in his preface, it is refreshing to encounter poets unafraid of discussing their own work, and Johnson has set up non-restrictive terms for discussion worthy of the genre itself. As for the poems themselves, no succinct summary will do them justice. Generically speaking, they riff off the anecdote, the description, the short-short story, love poetry, surrealist poetry, and even ekphrastic poetry. Sometimes prose is mixed with verse, and one poem is reminiscent of a page out of a Renaissance emblem book. Playfulness is a leitmotif of the volume, but the play takes many forms, and it is often a prelude to a complex thought or an intense emotion that might not be accessible through direct approach or through verse in its traditional forms.

"The publication of this anthology is also an occasion to reflect on prose poetry as a genre, or an anti-genre, depending on where one is coming from. Here is where the combination of poems and commentaries is especially appealing/thought-provoking. The commentaries, in their rhetorical gestures, like digression and self-correction, often take on the qualities of the prose poems they are reflecting on, and this blurring between poem and commentary is one of the many winning features of the book, making this anthology a cast-iron airplane that actually does fly."

--Steven Monte, author of Invisible Fences: Prose Poetry as a Genre in French and American Literature