A Christmas Carol Murder - (Dickens of a Crime) by Heather Redmond 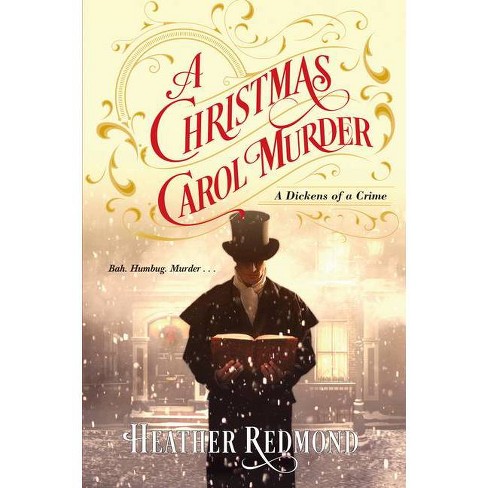 Witnessing the fatal defenestration of neighbor Jacob Harley while caroling in 1835 London, young Charles Dickens and his fiancâee, Kate, disagree about the case's chief suspect, Emmanuel Screws, an unpleasant counting-house codger with a rather colorful imagination.

The latest novel from Heather Redmond's acclaimed mystery series finds young Charles Dickens suspecting a miser of pushing his partner out a window, but his fiancée Kate Hogarth takes a more charitable view of the old man's innocence . . . London, December 1835: Charles and Kate are out with friends and family for a chilly night of caroling and good cheer. But their blood truly runs cold when their singing is interrupted by a body plummeting from an upper window of a house. They soon learn the dead man at their feet, his neck strangely wrapped in chains, is Jacob Harley, the business partner of the resident of the house, an unpleasant codger who owns a counting house, one Emmanuel Screws. Ever the journalist, Charles dedicates himself to discovering who's behind the diabolical defenestration. But before he can investigate further, Harley's corpse is stolen. Following that, Charles is visited in his quarters by what appears to be Harley's ghost--or is it merely Charles's overwrought imagination? He continues to suspect Emmanuel, the same penurious penny pincher who denied his father a loan years ago, but Kate insists the old man is too weak to heave a body out a window. Their mutual affection and admiration can accommodate a difference of opinion, but matters are complicated by the unexpected arrival of an infant orphan. Charles must find the child a home while solving a murder, to ensure that the next one in chains is the guilty party . . .

Praise for A Dickens of a Crime Mystery series

"One of the most satisfying mysteries you will read this year."
--Suspense Magazine on Grave Expectations

"A complex and highly satisfying mystery. Redmond weaves Dickensian themes--wealth and poverty, love and rejection--seamlessly throughout the story while evoking a Victorian era that feels immediate and alive. Fans of Anne Perry will love this one."
--Dianne Freeman, author of the Countess of Harleigh Mysteries

"Meticulous attention to historical details and the known elements of Dickens's life . . . a complex mystery that cunningly explores how Dickens might have been inspired to write the plot of his most well-known book . . . Sharp, incisive, and delightfully twisty. I'm sure I won't be the only reader exclaiming, 'What the Dickens?!'"
--Anna Lee Huber, bestselling author of the Lady Darby Mysteries

"For Dickens fans this charming little puzzler will prove a delight."
--Booklist

"One suspects that Mr. Dickens himself would thoroughly enjoy this literary play on his early life and sleuthing abilities. Great fun to read!"
--Catherine Lloyd, author of the Kurland St. Mary Mysteries

"A Tale of Two Murders is an all-over twisty read and a Dickens of a good mystery!"
--Julie Mulhern, USA Today bestselling author of The Country Club Murders

Though her last known British ancestor departed London in the 1920s, Heather Redmond is a committed anglophile, Dickens devotee, and lover of all things nineteenth century. She has lived in Illinois, California, and Texas, and now resides in a small town in Washington State with her husband and son. For more information please visit www.heatherredmond.com and twitter.com/heatheraredmond.
If the item details above aren’t accurate or complete, we want to know about it. Report incorrect product info.