A Conspiracy of Truths - by Alexandra Rowland (Hardcover) 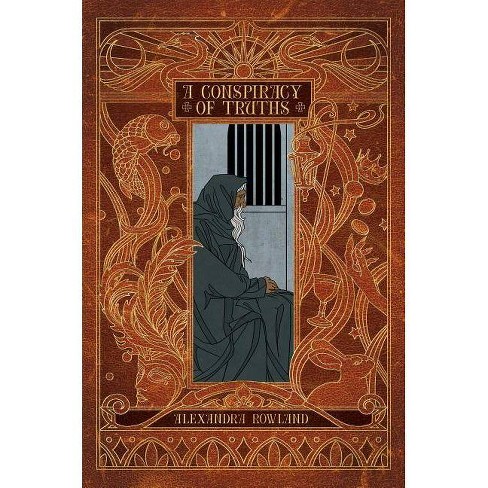 $25.99
undefined out of 5 stars with 0 reviews
be the first!be the first! ratings
Help us improve this page

A wrongfully imprisoned storyteller spins stories from his jail cell that just might have the power to save him--and take down his jailers too. Arrested on accusations of witchcraft and treason, Chant finds himself trapped in a cold, filthy jail cell in a foreign land. With only his advocate, the unhelpful and uninterested Consanza, he quickly finds himself cast as a bargaining chip in a brewing battle between the five rulers of this small, backwards, and petty nation. Or, at least, that's how he would tell the story. In truth, Chant has little idea of what is happening outside the walls of his cell, but he must quickly start to unravel the puzzle of his imprisonment before they execute him for his alleged crimes. But Chant is no witch--he is a member of a rare and obscure order of wandering storytellers. With no country to call his home, and no people to claim as his own, all Chant has is his wits and his apprentice, a lad more interested in wooing handsome shepherds than learning the ways of the world. And yet, he has one great power: his stories in the ears of the rulers determined to prosecute him for betraying a nation he knows next to nothing about. The tales he tells will topple the Queens of Nuryevet and just maybe, save his life.

"An impressive and thoroughly entertaining fantasy that isn't afraid to pull back the curtain on its craft, providing an insightful commentary about the art of storytelling and the dangerous, enchanting power that stories have to change reality itself...A world of words that readers will be loath to leave."-- "Publishers Weekly"

Alexandra Rowland is the author of A Conspiracy of Truths, A Choir of Lies, and Finding Faeries, and occasionally, a bespoke seamstress under the stern supervision of their feline quality control manager. They hold a degree in world literature, mythology, and folklore from Truman State University, and they are one of three hosts of the Hugo Award-nominated literary podcast, Be the Serpent. Find them at AlexandaRowland.net, on Twitter @_AlexRowland, or wandering the woods of western Massachusetts.
If the item details above aren’t accurate or complete, we want to know about it. Report incorrect product info.