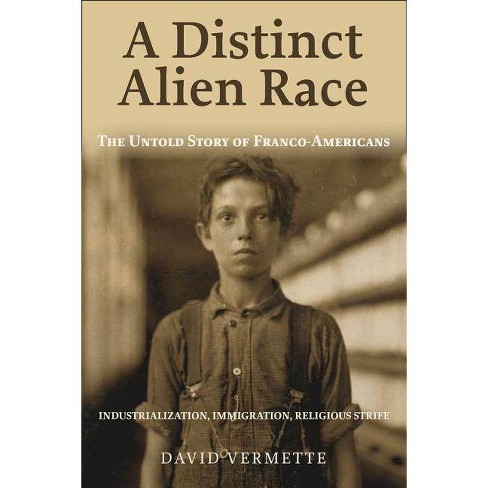 In the later 19th century, French-Canadian Roman Catholic immigrants from Quebec were deemed a threat to the United States, potential terrorists in service of the Pope. Books and newspapers floated the conspiracy theory that the immigrants seeking work in New England's burgeoning textile industry were actually plotting to annex parts of the United States to a newly independent Quebec. Vermette's groundbreaking study sets this neglected and poignant tale in the broader context of North American history. He traces individuals and families, from the textile barons who created a new industry to the poor farmers and laborers of Quebec who crowded into the mills in the post-Civil War period. Vermette discusses the murky reception these cross-border immigrants met in the USA, including dehumanizing conditions in mill towns and early-20th-century campaigns led by the Ku Klux Klan and the Eugenics movement. Vermette also discusses what occurred when the textile industry moved to the Deep South and brings the story of emigrants up to the present day. Vermette shows how this little-known episode in U.S. history prefigures events as recent as yesterday's news. His well documented narrative touches on the issues of cross-border immigration; the Nativists fear of the Other; the rise and fall of manufacturing in the U.S.; and the construction of race and ethnicity.

"First, let me say simply that this is a terrific book, the best synthesis of Franco-American history written to date...Both the research and prose are wonderful...Everyone with an interest in Franco-Americans should read this book." --Leslie Choquette, Resonance


"Meticulously researched and overflowing with facts, yet so well written that it's difficult to put down, the book tells a story few Americans are aware of." --Emilie Noelle Provost, The Bean Magazine (Lowell, Mass.)

"David Vermette's A Distinct Alien Race is an important study that goes well beyond just recounting an economic and social history of New England and Quebec. Vermette, an excellent and engaging writer/researcher, exposes an area of the past that has been somewhat dismissed and even discounted by both American and Quebec/Acadian historians who study the enormous French-speaking Canadian emigration from Quebec and the Maritimes to the textile industries of Massachusetts, Vermont, New Hampshire, and New York from the 1840s to the 1930s." --Sandra Stock, Quebec Heritage News

"I was struck by the ease with which [Vermette] is able to organize data-dense material and interpret it into natural and compelling prose. As a non-fiction writer, he has a kind of narrative patience I greatly admire, an ability to make his argument with a light touch, through the strength of his research and writing rather than with explicit or bellicose assertions... [H]e is a persuasive and entertaining storyteller. A Distinct Alien Race is a great gift to those of us with Franco-American ancestry, and to other readers it offers a thorough introduction to a large but often invisible ethnic group that has shaped New England and the U.S. more generally." --Abby Paige, https: //abbypaige.com/2018/09/28/a-distinct-alien-race/

"Readers interested in Canadian and American immigration history will appreciate the depth of Vermette's research and the fascinating story he tells." --Publishers Weekly

David Vermette is a researcher and writer who studies the history and identity of the descendants of French North America. He has been an invited speaker at universities and historical and genealogical societies. Vermette is a third generation Franco-American from Massachusetts.
If the item details above aren’t accurate or complete, we want to know about it. Report incorrect product info.