A Franchise on the Rise - by Dom Amore (Hardcover) 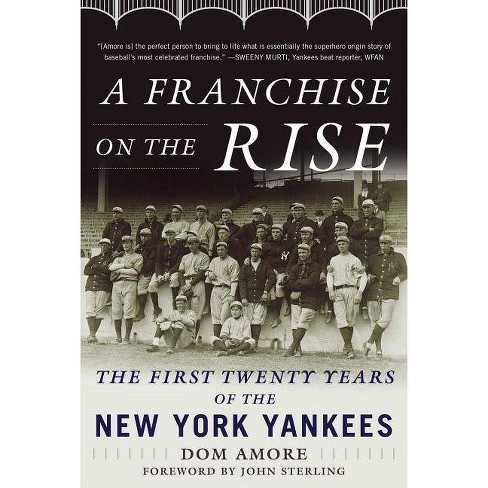 "In A Franchise on the Rise, baseball historian Dom Amore has proven equal to the challenge of turning the least known, least successful era of the New York Yankees into a compelling and fascinating read. Painstakingly researched, Yankee fans and baseball historians alike will applaud Amore's detailed, well-crafted treatment of the long-ignored pre-Babe Ruth Yankees." - Bill Madden, 2010 Baseball Hall of Fame J.G. Taylor Spink Award winner "Few people know and appreciate the complete history of the Yankees like Dom Amore. That's what makes him the perfect person to bring to life what is essentially the superhero origin story of baseball's most celebrated franchise. This is like learning about Krypton rather than Superman. We all know about Ruth & Gehrig, Mantle & Maris, Billy & George, Jeter & Mariano. Now we get the stories we don't know by heart. You can't call yourself a true Yankees fan until you know the whole story, the one Dom Amore tells in vivid detail." - Sweeny Murti, WFAN "For those who believe Yankees history began the day Babe Ruth reported for work in the spring of 1920, Dom Amore has written an essential primer on their long, occasionally difficult, and always colorful journey from the dregs of the American League to the throne of American sports. No other writer could have told this story as it needed to be told, and whether you are a fan of the Yankees or just of splendid storytelling this is a welcome addition to your bookshelf." -Mike Vaccaro, Sports columnist, New York Post; Author, 1941: The Greatest Year in Sports "What the early Yankees lacked in pennants they made up for with great turn-of-the-century characters. What a rogues gallery were they. Dom Amore mines this era beautifully." - Marty Appel, author of Pinstripe Empire, Casey Stengel, and Munson "The Yankees are the most successful organization in baseball history. Dom Amore does a wonderful job of taking us back to the beginning of that journey. A thorough and entertaining read for fans of baseball history." - Jack Curry, YES Network analyst
If the item details above aren’t accurate or complete, we want to know about it. Report incorrect product info.