A God Who Hates - by Wafa Sultan (Paperback) 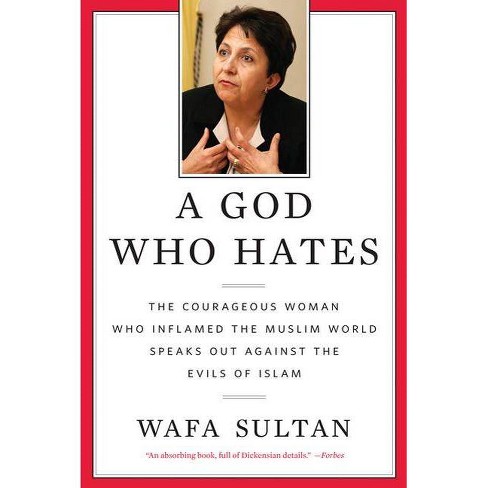 "Wafa Sultan is a great heroine of our times, willing to risk everything to stand up to these immense evils when most people are too fainthearted or politically correct to do so. A God Who Hates should be read closely and studied by the President, European leaders, and all Western policymakers and opinion-shapers -- before it is too late." --Robert Spencer, author of the New York Times bestsellers The Politically Incorrect Guide to Islam (and the Crusades) and The Truth About Muhammad

"Wafa Sultan experienced firsthand the immense contempt of human dignity Islam harbours, and the unimaginable cruelty Muslim women have to endure on a daily basis, resulting from it. Her compelling book is a touching life story filled with bone chilling examples of what it is like to live in a society that is ruled by Islam and how valuable our Western freedom truly is. It is because brave women like Wafa Sultan have the courage to speak out against this doctrine of hate that we in the West have been forewarned. I hope that everyone reads this book and takes note of the important message it contains. We must defend our precious liberties, our Western freedom and never give in to Islam." --Geert Wilders, member of the Dutch Parliament and leader of the Party for Freedom

"With rare courage and candor, Wafa Sultan throws open the shuttered windows on Islam, letting clean, bright sunshine pour into its darkest corners to illuminate Islam from the inside. This is where she lived it, confronted it, and ultimately rejected its sacralized teachings--on women, on marriage, on children, on Christians, on Jews, on freedom of conscience, on war, on world domination--as a humanity-warping pathology based on hate and fear. Such is the fascinating psychological analysis that is the underpinning achievement of A God Who Hates With unique insight and unstinting compassion, Wafa Sultan, a trained psychiatrist, employs her expertise to put Islam on the couch. The results of her analysis will startle, engage, deepen and transform every reader's understanding of Islam forever." --Diana West, author of The Death of the Grown-Up: How America's Arrested Development is Bringing Down Western Civilization

"Wafa Sultan paints a scorching, unforgettable portrait of Syrian Muslim society, especially the degradation of its women, and lyrically appreciates her adopted American homeland, which she calls "the land of dreams." But she also worries that Middle East customs are encroaching on the West and writes with passion to awaken Americans to a menace they barely recognize, much less fear." --Daniel Pipes, Director, Middle East Forum

"Like thousands of others, I first encountered Wafa Sultan on a stunning YouTube video. Here was a woman on Al-Jazeer a TV, eloquently and courageously defending Western civilization, individualism and reason against the barbarity and mysticism of radical Islam. Her performance was mesmerizing. She was articulate, self-confident, and outspoken. She stunned the audience, the interviewer and the pathetically out-matched Imam who opposed her. Now Wafa Sultan has written her life story in this powerful book. She exposes the ugliness that is Muslim society in theMiddle East, while unapologetically defending the Western values she adopted when rejecting the religion of Islam. If you want to understand this courageous woman, who continues to fight for her beliefs in spite of death threats, and to understand her views on the conflict between Islam and the West, this is a must read." --Yaron Brook, Ph.D., President and Executive Director, The Ayn Rand Institute