A Man at Arms - by Steven Pressfield 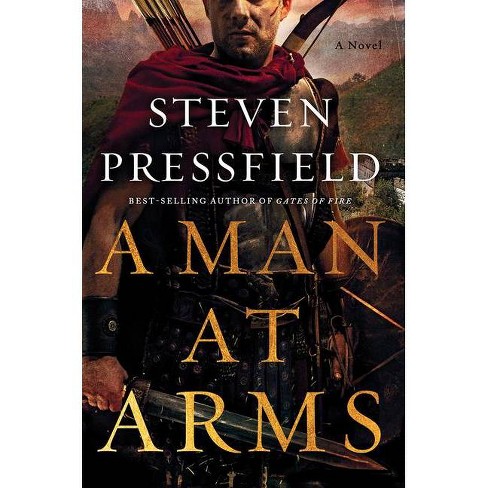 From the acclaimed master of historical fiction comes an epic saga about a reluctant hero, the Roman Empire, and the rise of a new faith.

Jerusalem and the Sinai desert, first century AD. In the turbulent aftermath of the crucifixion of Jesus, officers of the Roman Empire acquire intelligence of a pilgrim bearing an incendiary letter from a religious fanatic to insurrectionists in Corinth. The content of this letter could bring down the empire.

The Romans hire a former legionary, the solitary man-at-arms, Telamon of Arcadia, to intercept the letter and capture its courier. Telamon operates by a dark code all his own, with no room for noble causes or lofty beliefs. But once he overtakes the courier, something happens that neither he nor the empire could have predicted.

In his first novel of the ancient world in thirteen years, the best-selling author of Gates of Fire and Tides of War returns with a gripping saga of conquest and rebellion, bloodshed and faith.

A master storyteller's searing epic. Steven Pressfield brings to life a warrior's limitless devotion and the total commitment to serving humanity. Powerfully told yet humbling, A Man At Arms will remain with you long after you put it down.--General Jim Mattis, US Marines (Ret.) and 26th Secretary of Defense

An incredible book that I devoured in one sitting. The master behind Gates of Fire does it again!--Ryan Holiday, #1 New York Times best-selling author of Stillness Is the Key

A Man at Arms captures not only the ferocity and shock of battle, but also the relationships and emotions that make warfare so awful and yet so glorious.--Jocko Willink

A Man At Arms explores the warrior ethos through the eyes and heart of a mercenary whose calling is tested on a journey of transformation. A masterpiece!--Jack Carr, Navy SEAL sniper and New York Times best-selling author of Savage Son

A great warrior comes face to face with the only thing that could ever change him: a little girl who holds both hope and humanity in her heart. This is Pressfield's best work.--Jim Gant, ex-Green Beret, Silver Star recipient, and author of One Tribe at a Time

An enthralling epic from the master of historical fiction with tremendous character development, fast-paced action, and extraordinary combat scenes! A truly wonderful read.--General David Petraeus, US Army (Ret.), former commander of the Surge in Iraq, US Central Command, and Coalition Forces in Afghanistan, and former director of the CIA
If the item details above aren’t accurate or complete, we want to know about it. Report incorrect product info.