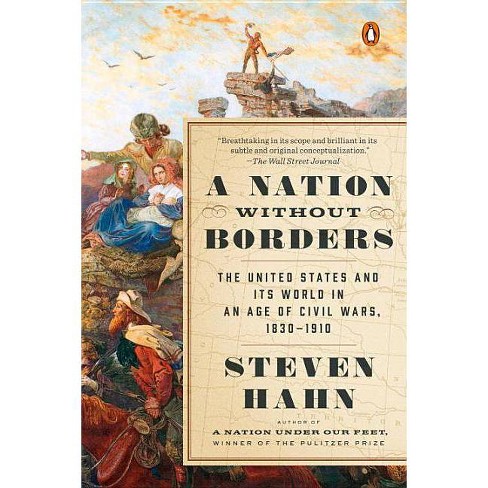 $14.89
MSRP$20.00
no reviews yet
be the first!be the first! ratings
Shipping
Free standard shipping with RedCard
Help us improve this page

"A massive and masterly account of America's political and economic transformation between 1830 and 1910 . . . Hahn describes his book as telling 'a familiar story in an unfamiliar way.' It is much more than that. Attempting a synthesis of a century's worth of American history is a daunting task. Writing one as provocative and learned . . . as this one is a triumph, nothing less."--David Oshinsky, The Washington Post "Rarely has there been a more forthright challenge to old stereotypes than in Steven Hahn's A Nation Without Borders, his distinguished volume in the Penguin History of the United States on the period 1830-1910 . . . rich in insight on the making of the US during a crucial period."--Peter Clarke, Financial Times "Vivid detail . . . A Nation Without Borders is a detailed, dense . . . His chronicle is breathtaking in its scope and brilliant in its subtle and original conceptualization of the nation during this period. It is often affecting, too, especially in its descriptions of labor activism . . . There is a cautionary tale here for our own time."--John Stauffer, The Wall Street Journal "In his comprehensive A Nation Without Borders, Hahn . . . provides the most sweeping indictment to date of the American appetite for conquest."-- The New York Times Book Review "Capacious [and] buzzing with ideas."--The Boston Globe "Brisk and thought-provoking . . . Readable and illuminating, and Hahn's thesis will lead many writers, students, and history buffs to rethink what they have learned from a new perspective."--The Weekly Standard "This breathtakingly original 'history of the United States'--which begins and ends in Mexico, naturally--strikes like lightning. It illuminates the complex sweep of forces that came together in the decades surrounding the Civil War to forge the American nation. Only Hahn could have written such a revelatory book." --Junot Diaz, Pulitzer Prize-winning author of The Brief Wondrous Life of Oscar Wao "This magisterial and authoritative monograph is a must-read for anyone interested in U.S. history." --Library Journal (starred review) "A compelling examination of the long, divisive road to America's emergence, in 1919, as 'the most formidable power in the world.'" --Kirkus

"Given Hahn's unimpeachable body of knowledge, readers can be confident that they're getting the most current understanding of the history of the U.S....bears reading by all serious students of the American past." --Publishers Weekly "A bold reinterpretation of the American nineteenth century, this tour de force bristles with fresh insights gained from often surprising vantage points... It confirms Hahn's position as one of the most important interpreters of the American experience. A must read for anyone interested in the history of the United States." --Sven Beckert, author of Empire of Cotton

"Steven Hahn has given us an ambitious and marvelously grounded rethinking of our history during eighty of its most turbulent, violent and creative years. It challenges some of our most fundamental predilections and reimagines how the nation we know came to be. It is guaranteed to rearrange your mental furniture." --Elliott West, author of The Contested Plains
If the item details above aren’t accurate or complete, we want to know about it. Report incorrect product info.