A Philosophy of Ruin - by Nicholas Mancusi (Hardcover) 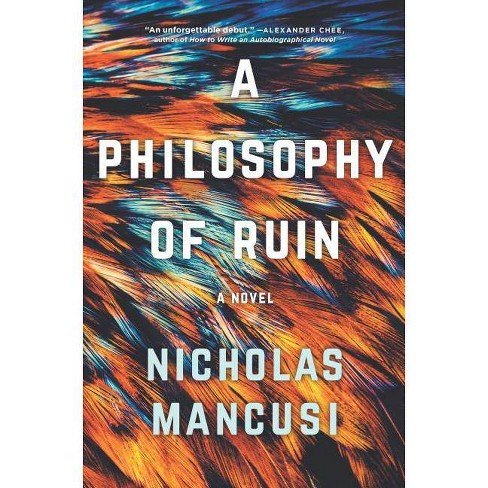 "You don't really know your parents completely until after their death, when you meet them at last, without their being able to distract you from what they don't want you to see--but nothing prepares you for how you meet yourself at the same time. This is where A Philosophy of Ruin begins. Funny, wise, mature beyond its years, this is a fable of late capitalism, a cautionary tale about aging parents, and an unforgettable debut. Mancusi is a writer to watch."--Alexander Chee, author of How to Write an Autobiographical Novel
"A Philosophy of Ruin is a wickedly sharp novel, darkly hilarious yet also big-hearted and full of surprising twists and turns. I couldn't put it down."--Dan Chaon, author of Ill Will
"A quick, terrifying, uncompromising novel about fate and family with echos of Denis Johnson and Robert Stone, but with a dark, propulsive energy all its own. This novel marks the arrival of a voice that will be bringing us the worst news in the most riveting fashion for many years to come."--David Burr Gerrard, author of The Epiphany Machine
"A Philosophy of Ruin is the smartest blend of philosophy seminar and action movie. I loved it."--Caroline Kepnes, author of YOU
"What novel has the audacity to pair serious meditations on human free will with an antic high-stakes caper about making fast money by going dangerously south of the law? Nicholas Mancusi's debut novel, that's what. At turns harrowing and hilarious, deeply affecting and bad-ass clever, A Philosophy of Ruin fights against all expectations and delivers something truly weird and wonderful. A thinking person's novel strapped to a stolen firearm."--Christopher Bollen, author of The Destroyers
"Nicholas Mancusi has written a brilliant big-hearted explosion of a father and son novel, each man shot out into the world at the wildest of vectors and landing as smoldering rubble. Imagine a killer, like Benicio del Toro in Sicario, dropping down right in the middle of The Corrections and you have some idea of the book you're holding." --Will Chancellor, author of A Brave Man Seven Storeys Tall
"Nicholas Mancusi's potent first novel trembles along the fault lines of our destinies and dread. His protagonist, Oscar Boatwright, is an uncommon quester with a vision, and not someone you are likely ever to forget. Honed in prose that reaches both within and without, A Philosophy of Ruin boasts what many novels don't even know they need: a gusto unafraid of sounding what is best and worst in us."--William Giraldi, author of Hold the Dark
"Tenderly written..frenetic...moving and humorous. Mancusi's novel successfully depicts the long, mutating shadow of grief and depression."--Publishers Weekly
"Profound. Brooklyn writer Mancusi's revelatory novel is a drug tale with a difference--even the chase scenes are philosophical." -Kirkus Reviews (STARRED review)
"A gripping thriller... Mancusi's writing is sophisticated, graceful, and deeply empathetic." -Booklist
"A whirlwind of chaos...Mancusi's debut novel displays dark humour and intellectual depth."--TIME
"A Philosophy of Ruin, brings together an exploration of morality with a gripping plot."--Vol. 1 Brooklyn
"Riveting fun to read."--New York Times Book Review
"This debut is a literary thriller with shades of Denis Johnson and Cormac McCarthy, but the balance of heart, humor and dialogue is what makes it stand out from the rest of the writers that derive influence from those dirty realist masters. It's the sort of novel that Breaking Bad fans should make sure to pick up asap."--InsideHook
If the item details above aren’t accurate or complete, we want to know about it. Report incorrect product info.