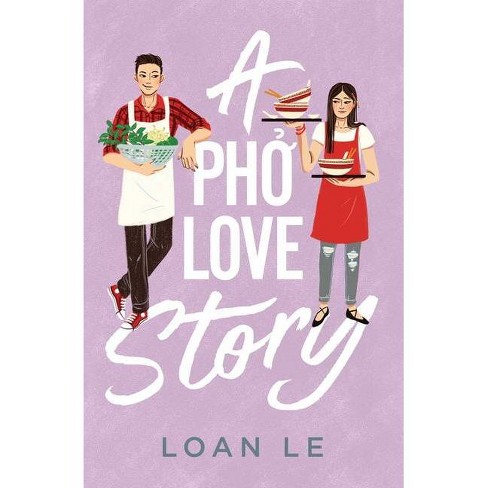 High school seniors Bàao and Linh, whose feuding families own competing Vietnamese restaurants, conceal their budding romance, as well as Linh's desire to become an artist.

"Will leave readers swooning." --PopSugar ​When Dimple Met Rishi meets Ugly Delicious in this funny, smart romantic comedy, in which two Vietnamese American teens fall in love and must navigate their newfound relationship amid their families' age-old feud about their competing, neighboring restaurants. If Bao Nguyen had to describe himself, he'd say he was a rock. Steady and strong, but not particularly interesting. His grades are average, his social status unremarkable. He works at his parents' pho restaurant, and even there, he is his parents' fifth favorite employee. Not ideal. If Linh Mai had to describe herself, she'd say she was a firecracker. Stable when unlit, but full of potential for joy and fire. She loves art and dreams pursuing a career in it. The only problem? Her parents rely on her in ways they're not willing to admit, including working practically full-time at her family's pho restaurant. For years, the Mais and the Nguyens have been at odds, having owned competing, neighboring pho restaurants. Bao and Linh, who've avoided each other for most of their lives, both suspect that the feud stems from feelings much deeper than friendly competition. But then a chance encounter brings Linh and Bao in the same vicinity despite their best efforts and sparks fly, leading them both to wonder what took so long for them to connect. But then, of course, they immediately remember. Can Linh and Bao find love in the midst of feuding families and complicated histories?

"Perfect." --HelloGiggles "Will leave readers swooning." --PopSugar "Utterly delicious." --BuzzFeed "Le pens a love letter to her heritage, while never shying from the trauma of the Vietnam War. . . . Readers will experience a gambit of emotions while reading this stirring novel, including hunger, loss, and finally, unadulterated joy." --Booklist, starred review "Hearty and heartwarming." --Kirkus Reviews "[A] warm, delightful read." --Publishers Weekly "As satisfying as a bowl of pho." --SLJ A Junior Library Guild Selection
If the item details above aren’t accurate or complete, we want to know about it.

2 out of 5 stars
Would not recommend
Kelsey - 8 months ago, Verified purchaser
Slow and uneventful. Clunky dialogue, worsened by untranslated Vietnamese phrases… I’m all for for bringing in non-English phrases, but provide an appendix or a translation - i was stuck googling mid page every page. Ultimately I just gave up and skipped that dialogue. I was hoping for a cute, quick romance and this was not it.
1 guest found this review helpful. Did you?

very good book 10 out of 10 recommended

5 out of 5 stars
Would recommend
Rachel - 2 years ago
love all nothing wrong just all awsome
1 guest found this review helpful. Did you?