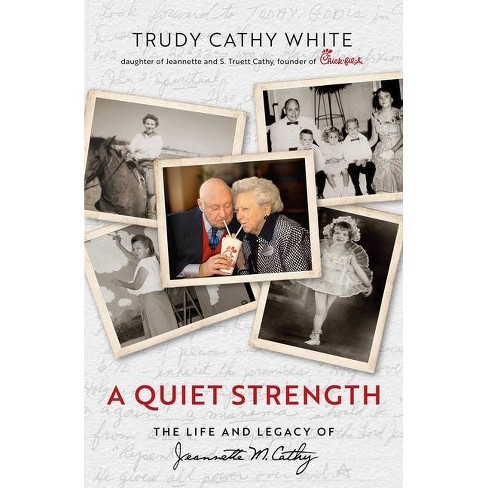 While S. Truett Cathy was building Chick-fil-A, Jeannette M. Cathy was nurturing a family and together with their faith, they built an empire based on biblical principles. Chick-fil-A has become a national phenomenon over the past fifty years, forever changing the fast food industry in terms of food quality and customer service. Much has been written about Chick-fil-A founder S. Truett Cathy over the years, but the true, behind-the-scenes story of the Cathy family has never been told . . . until now. In A Quiet Strength, Truett's daughter, Trudy Cathy White, tells the story of the real heart and soul of the Cathy family: her mother, Jeannette M. Cathy. This heartwarming memoir presents Trudy's first-hand look at her mother's amazing life, including growing up during the Great Depression with a struggling single mother, being crowned the best dancer in Atlanta at age six, singing in church revivals all across Georgia at age eight, breaking tradition by attending both college and seminary as a woman in the 1940s, and helping found the most influential and fastest-growing restaurant chain in the country. Trudy also shares Jeannette's often-unbelievable misadventures raising three children on the Cathy farm--from beekeeping fiascos to regularly chasing a pony, a parrot, and a monkey around her living room! Throughout her incredible ninety-two years, Jeannette M. Cathy was an accomplished singer, dancer, musician, painter, theologian, farmhand, and self-taught repairman. Her most important roles, though, were the ones a precious few ever saw: that of a wife, mother, and grandmother. As S. Truett Cathy often said, "Jeannette can do and has done anything and everything. All I ever did was put a piece of chicken between a buttered bun!" Join Trudy Cathy White on a tour through the life of the surprising, enterprising, and downright hilarious grandmother you never knew you needed!

Trudy Cathy White is a native Georgian and the only daughter of Jeannette and S. Truett Cathy, the founder of Chick-fil-A, Inc. An ambassador for the family business, Trudy has held various roles within Chick-fil-A including that of restaurant operator at just 19 years old. Trudy and her husband, John, served as missionaries in Brazil and co-founded Lifeshape and Impact 360 Institute. A developer and encourager at heart, White served as the Director of WinShape Camps for Girls from 2003-2017. She is a speaker, author, dedicated wife, mother of four, and grandmother of fifteen. Every day she is fueled by her passion to be intentional with her influence. In everything Trudy does, she is led by her commitment to obey God's leadership, nurture family relationships, and promote godly character in the next generation. More information on Trudy's life and family can be found at trudycathywhite.com.
If the item details above aren’t accurate or complete, we want to know about it. Report incorrect product info.