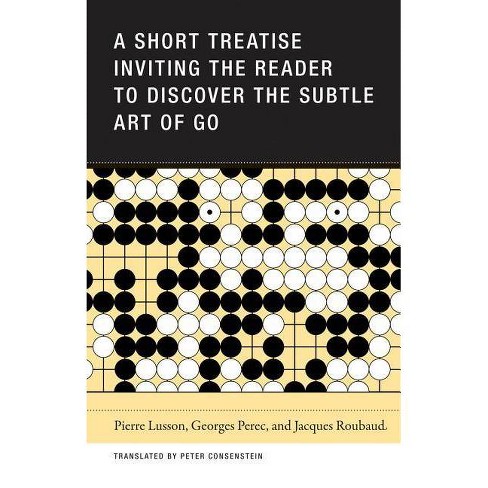 An introduction to the ancient Japanese strategy game of Go by Oulipo members Pierre Lusson, Georges Perec and Jacques Roubaud

Written by a mathematician, a poet and a mathematician-poet, this 1969 guide to the ancient Japanese game of Go was not only the first such guide to be published in France (and thereby introduced the centuries-old game of strategy into that country) but something of a subtle Oulipian guidebook to writing strategies and tactics.

As in the Oulipian strategy of writing under constraint, the role of structured gameplay (within literature and without) proves to be of primordial importance: a means of moving outside an inherent system, of instigating new figures of style and meaning, new paths toward collaboration and new strategies for filling a space: be it the space of a terrain, a blank page, a white screen or a freshly stretched canvas. Translated for the first time, this treatise outlines the history of Go, the rules for playing it, some central tactics and strategies for playing it and overcoming the threats posed by an opponent, general information and trivia, and a glossary that ranges from Atari (check) to Yose (the end of a match). Pierre Lusson (born 1950) is a French mathematician and musicologist. With Jacques Roubaud, he helped introduce the game of Go into France. Georges Perec (1936-82) was a French novelist, essayist and filmmaker whose linguistic talents ranged from fiction to crossword puzzles to authoring the longest palindrome ever written. Winner of the prix Mï¿½dicis in 1978 for his most acclaimed novel, Life A User's Manual, Perec was also a member of the Oulipo, a group of writers and mathematicians devoted to the discovery and use of constraints to encourage literary inspiration. One of their most famous products was Perec's own novel, A Void, written entirely without the letter "e." Jacques Roubaud (born 1932) is a French poet and mathematician, a former professor of mathematics at University of Paris X and a member of the Oulipo group. His many books translated into English include The Great Fire of London, Some Thing Black, The Form of a City Changes Faster, Alas, than the Human Heart and The Loop.
If the item details above aren’t accurate or complete, we want to know about it. Report incorrect product info.