A Sky Without Eagles - by Jack Donovan (Paperback) 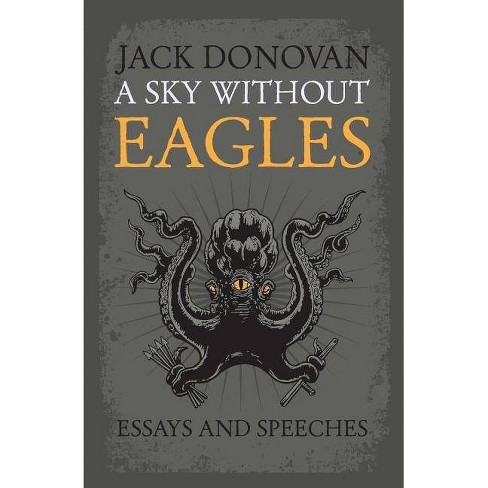 A Sky Without Eagles is the first printed collection of The Way of Men author Jack Donovan's essays and speeches. Beginning with his viral hit, "Violence is Golden," A Sky Without Eagles assembles Donovan's best standalone commentary from 2010 through 2014. In his straightforward but disarmingly sincere style, Donovan channels the widespread disillusionment and frustration of men in the increasingly restrictive developed world. A Sky Without Eagles covers race realism, criticizes feminism's degenerative influence on masculinity, and in the title speech, laments the lack of virtue and nobility in American leadership. Donovan wrote three new essays for A Sky Without Eagles. The first, "Train For Honor," deals with his search for meaning in strength training."CROM!" sums up Donovan's agnostic take on what kind of religion men need today. This collection concludes with "The Brotherhood" -- Donovan's imagining of a better, manlier and more spiritually unified tribe of men. "With this collection, Jack Donovan clearly demonstrates his deep and prescient understanding of a very particular type of man: at once revolutionary and traditional - an outsider amongst outsiders. But Donovan goes further than mere understanding, for in his use of physiological warfare against epistemological enslavement, he offers each of us an escape route from the promise of a deracinated and emasculated future." Mark Dyal, Ph.D., author of Ultras Contra Modernity: Romans in Revolt (Arktos, 2014). "Jack Donovan writes what most men think." Mike Smock, Pulse Firearms Training. "Knowing the truth means little if you lack the courage to express it in a world built on lies. Expressing it means little either if you lack the skill to capture and convince an audience. The essays in A Sky Without Eagles teem with ancient truths and new insights delivered with courage, humor, and compelling logic. Truth + courage + style = the latest Jack Donovan book." Greg Johnson, author of New Right vs.Old Right "I loved reading "Violence is Golden". It was provocative and inspiring. I enjoyed it so much that I shared it online and was stunned by how much controversy it created. (I'm sure that those that "violently" opposed the views of Mr. Donovan, missed the irony of their anger). Embracing violence doesn't mean you must be violent ... as a self-defense consultant, it means you must understand violence so that you can do your best to intercept it. In a real fight, when you are the target, it's not who's right that matters, its who's left." Tony Blauer, Blauer Tactical Systems
If the item details above aren’t accurate or complete, we want to know about it. Report incorrect product info.