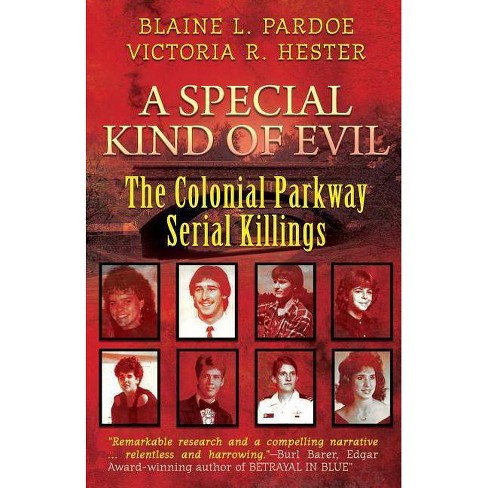 In the late 1980s, a predator stalked the Tidewater region of Virginia, savagely murdering his carefully selected his prey. He, or they, demonstrated a special kind of evil, and to this day have evaded justice. This is the first comprehensive look at the Colonial Parkway Murders and sheds new light on the victims, the crimes, and the investigation.

The Colonial Parkway Murders -the name given eight murders that took place in the Tidewater region in the late 1980's, two of which were on the historic Colonial Parkway, the nation's narrowest National Park. Young people in the prime of their lives were the targets. But the pattern that stitched this special kind of evil together was more like a spider web of theory, intrigue, and mathematics. Then, mysteriously, the killing spree stopped. The nameless predator, or predators, who stalked the Colonial Parkway stepped back into the mists of time and disappeared.

Now, father-daughter true crime authors Blaine Pardoe and Victoria Hester blow the dust off of these cases. Interviewing members of the families, friends, and members of law enforcement, they provide the first and most complete in-depth look at this string of horrific murders and disappearances. The author-investigators peel back the rumors and myths surrounding these crimes and provide new information never before revealed about the investigations.

"Pardoe is the master of atmosphere and setting the scene. Pardoe and his daughter Victoria, put you inside a DeLorean time machine with a flux capacitor ... Once you're taken back to that time and place, you want to stay there and look around for a while. Peer over the investigators shoulder as they examine the crime scene." - Historical Crime Detective

"Pardoe and Hester, a father-and- daughter writing team, have presented a well-organized and highly entertaining examination of a puzzling case that's still rife with unanswered questions." - The Lansing State Journal

"... this is no fictional work of fevered imagination; it's the real thing. Blaine Pardoe nimbly explores his story of murder, sex, and psychopaths in what makes for a crackling good read. This is a real 'can't put it down' page turner!" - Arnie Bernstein, author of Bath Massacre: America's First School Bombing