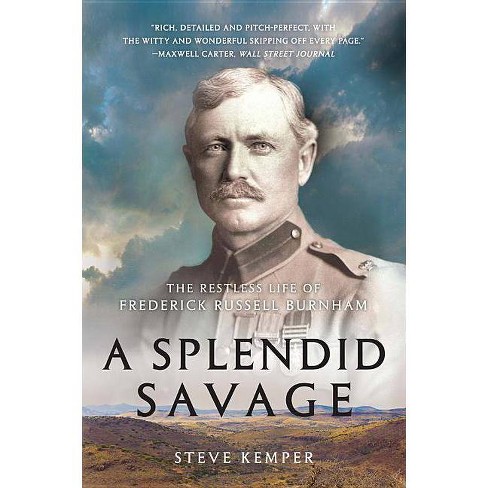 Rich, detailed, and pitch-perfect, with the witty and wonderful skipping off every page. --Maxwell Carter, Wall Street Journal

Frederick Russell Burnham's (1861-1947) amazing story resembles a newsreel fused with a Saturday matinee thriller. One of the few people who could turn his garrulous friend Theodore Roosevelt into a listener, Burnham was once world-famous as "the American scout." His expertise in woodcraft, learned from frontiersmen and Indians, helped inspire another friend, Robert Baden-Powell, to found the Boy Scouts. His adventures encompassed Apache wars and range feuds, booms and busts in mining camps around the globe, explorations in remote regions of Africa, and death-defying military feats that brought him renown and high honors. His skills led to his unusual appointment, as an American, to be Chief of Scouts for the British during the Boer War, where his daring exploits earned him the Distinguished Service Order from King Edward VII.

After a lifetime pursuing golden prospects from the deserts of Mexico and Africa to the tundra of the Klondike, Burnham found wealth, in his sixties, near his childhood home in southern California. Other men of his era had a few such adventures, but Burnham had them all. His friend H. Rider Haggard, author of many best-selling exotic tales, remarked, "In real life he is more interesting than any of my heroes of romance."

Among other well-known individuals who figure in Burnham's story are Cecil Rhodes and William Howard Taft, as well as some of the wealthiest men of the day, including John Hays Hammond, E. H. Harriman, Henry Payne Whitney, and the Guggenheim brothers.

Failure and tragedy streaked his life as well, but he was endlessly willing to set off into the unknown, where the future felt up for grabs and values worth dying for were at stake. Steve Kemper brings a quintessential American story to vivid life in this gripping biography.

[A] life was so full of derring-do and fearless exploits that, lacking historical record, one would assume him to be myth.--Jonah Ogles "Outside"

A brilliant biography of a Westering man whose life would have been remembered by all who have studied and written about the West, except for the fact that the arc of his life, which reads like a Jack London adventure, stretched well beyond the borders of the American West in time and scope.--Stuart Rosebrook "True West"

A splendid book about an amazing life. If this work were not history, it might seem an overly ambitious adventure novel whose hero deserved a multi-volume series.--Clyde A. Milner "History Book Club"

Admirably resurrects the larger-than-life figure of Frederick Russell Burnham (1861-1947) in an account chockfull of adventures that feel ripped from dime-store novels.-- "Publishers Weekly"

Burnham lived a life of astonishing adventure...In Kemper's sure and enthusiastic hands, Burnham storms through the pages of this rousing volume, outwitting determined foes and collecting mining and ranching interests on two continents that never seemed to pay off as expected...Thrilling adventures presented with the flair they deserve.-- "Kirkus Reviews"

Monumental...every chapter of which could inspire a thrilling novel on its own.-- "Historical Novel Society"

There's almost too much for one book, let alone one life...Mr. Kemper's narrative is rich, detailed, and pitch-perfect, with the witty and wonderful skipping off every page.--Maxwell Carter "Wall Street Journal"
If the item details above aren’t accurate or complete, we want to know about it. Report incorrect product info.