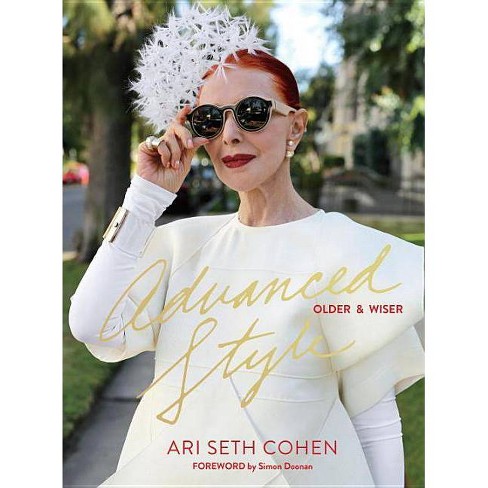 "Ari Seth Cohen's new book, Advanced Style: Older & Wiser, which is filled with street-style photos and brief profiles of older people who dress with more exuberance than the average millennial, shows that notion to be nonsense." --Quartz "'Ari's been concentrating on women of a certain age, but why not men? Maybe they're harder to find, like a needle in the haystack!' comically posits Derrill Osborn, one of the breakout menswear stars of Ari Seth Cohen's upcoming tome, Advanced Style: Older and Wiser." --Vogue "The subjects in Cohen's photographs are unapologetic peacocks. They do not abide the unspoken dictates of age-appropriateness nor subscribe to the current vogue for studied nonchalance." --Slate 'I must tell you that I am not really an old lady, just cleverly disguised as one, ' the seventy-five-year-old cook-turned-artist Sue Kreitzman tells Ari Seth Cohen in his new book, 'Advanced Style: Older and Wiser.' The bundles of vibrant patterns and fabrics that she sports certainly suggest a young eye and a joyful soul, her snowy hair notwithstanding. Cohen has just compiled his second volume of photographs and interviews, based on his beloved blog, highlighting the sprightly, inventive clothes he observes on the city's elderly, all largely ignored by the fashion élite." --The New Yorker "...now he's come out with a second book, Advanced Style: Older & Wiser, which not only depicts men and women in all their splendor, but their hearts and souls, too, with accompanying essays." --Hadassah

"A certain street-stylish, over-50 set is turning the notion of age-appropriate dressing on its head, wearing Iris Apfel glasses, feather boas, and leather that would put Balmain to shame. Photographer Ari Seth Cohen has chronicled these chic grandmothers -- and grandfathers -- on his travels in Buenos Aries, Tokyo, and Sydney." --The Cut "A prolific understanding of what fashions work best for you, not others, is an acquired skill. And no one has perhaps captured the art of years-wise dressing better than blogger, author, and photographer Ari Seth Cohen, who, for years--eight, to be exact--has scoured to globe to gift us with a replenished collection of images that highlight just how well ladies and gentleman of a certain age can dress." --InStyle

"Cohen's work captures the creativity, positivity, and spirit of fashionable seniors who are transforming cliché notions of aging," --Flavorwire "We all have our style icons: RiRi in a Swarovski crystal thong, Beyoncé in Roberto Cavalli with a baseball bat, Prince, always. But often our greatest style inspiration comes closer to home, or right in the family. For Ari Seth Cohen, the most influential fashion icons are the ones that we might overlook: our grandparents." --Paper "The book also includes 22 personal essays from a few of the fabulous faces, offering their time-tested wisdom on both style and lifestyle, often capturing the intersection between the two. A fierce panache for fashion and a daring approach to personal expression seem to coincide with a wholehearted, vibrant way of being, based on these gray-haired and glorious ladies and gents." --My Modern Metropolis "As we get older, it's easy to worry about our looks and to fear invisibility. The antidote to that is Advanced Style, photographer Ari Seth Cohen's online homage to older people's street style." --BUST Magazine

"Now a new book of street fashion celebrates the rise of the bolder and wiser, who never let age stand in their way of looking great." --Saga

"With a foreword from the well-loved eccentric fashion commentator Simon Doonan and essays from some of the subjects themselves, in addition to Cohen's photographs that brim with glorious personality, this book is filled with hilarious, well-worn wisdom." --Rangefinder "From head-to-toe tiger print to bright blue hair, all-over clashing patterns and heart-shaped shades, every single look is enviable." --Cool Hunting As seen on
Spiegel
F-Stop
Medium
Next Avenue
Feature Shoot
VIVA - The New Zealand Herald
Huffington Post
New York Post
Growing Bolder
ABC News
We Heart
i-D
GLAM4GOOD Praise for Ari's first book: "In print and on film, Mr. Cohen's arrestingly bedizened models embrace fashion with a sense of play."
Ruth LaFerla, The New York Times

"For all those who are sick and tired of seeing style and fashion presented solely as a young woman's game, behold 'Advanced Style.'"
Los Angeles Times "a beautiful catalog of women who aren't over the hill, but rather ahead of the curve."
New York Post "Advanced Style likely owes its rapid ascent in part to the dearth of attention paid anyone over 30 in popular culture. How the opportunity was missed is anyone's guess: According to 2010 census estimates, Americans 65 and older constitute 13 percent of the population. Those 45 and over -- still two to three times the age of most female models -- constitute more than 39 percent." New York Times "'The women who I photograph are confident. They know what they like, they know what suits their bodies, and they're dressing for themselves. They don't dress based on trends.'" Ari Seth Cohen, New York Times "These gorgeous ladies take away the fear of aging and give us all something to look forward to." Huffington Post "These women are proof that personal style advances with age"
StyleList "I was best friends with my grandmother growing up, and was always inspired by her energy and wisdom. I wanted to show that creativity, style, and vitality advance with age, and hopefully help change people's ideas about getting older."
Ari Seth Cohen, StyleCaster
If the item details above aren’t accurate or complete, we want to know about it. Report incorrect product info.

Get it by Thu, Mar 4 with free Standard Shipping