After Life : My Journey from Incarceration to Freedom - by Alice Marie Johnson (Hardcover) 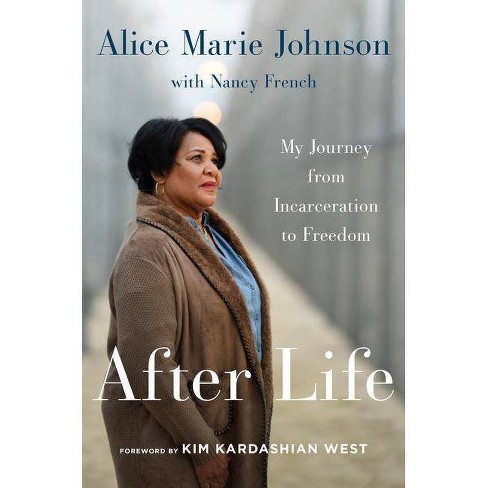 Foreword by Kim Kardashian West
The true-life story of the woman whose life sentence for non-violent drug trafficking was commuted by President Donald Trump thanks to the efforts of Kim Kardashian West--an inspiring memoir of faith, hope, mercy, and gratitude.

How do you hold on to hope after more than twenty years of imprisonment? For Alice Marie Johnson the answer lies with God.

For years, Alice lived a normal life without a criminal record--she was a manager at FedEx, a wife, and a mother. But after an emotionally and financially tumultuous period in her life left her with few options, she turned to crime as a way to pay off her mounting debts. Convicted in 1996 for her nonviolent involvement in a Memphis cocaine trafficking organization, Alice received a life sentence under the mandatory sentencing laws of the time. Locked behind bars, Alice looked to God. Eventually becoming an ordained minister, she relied on her faith to sustain hope over more than two decades--until 2018, when the president commuted her sentence at the behest of Kim Kardashian West, who had taken up Alice's cause.

In this honest, faith-driven memoir, Alice explains how she held on to hope and gave it to others, from becoming a playwright to mentoring her fellow prisoners. She reveals how Christianity and her unshakeable belief in God helped her persevere and inspired her to share her faith in a video that would go viral--and come to the attention of celebrities who were moved to action.

Today, Alice is an icon for the prison reform movement and a humble servant who embraces gratitude and God for her freedom. In this powerful book, she recalls all of the firsts she has experienced through her activism and provides an authentic portrait of the crisis that is mass incarceration. Linking social justice to spiritual faith, she makes a persuasive and poignant argument for justice that transcends tribal politics. Her story is a beacon in the darkness of despair, reminding us of the power of redemption and the importance of making second chances count.

How do you hold on to hope after more than twenty years of imprisonment? For Alice Johnson, the answer lies with God.

For her whole life Alice Johnson had been an up-standing citizen, but in 1992, after an emotionally and financially tumultuous period left her with few options, she turned to crime as a way to pay off her mounting debts. Convicted in 1996 for her nonviolent involvement in a Memphis cocaine trafficking organization, she received life in prison under the mandatory sentencing laws of the time. Twenty years later, a video of Alice telling her story from prison went viral, and she found celebrity recognition, most notably from Kim Kardashian West, whose activism on Alice's behalf led President Trump to commute her sentence in 2018.

In this inspiring memoir of faith, Alice recounts the story of her journey to forgiveness, detailing how she held on to her own hope while giving hope to others during her two decades of incarceration. From becoming an ordained minister to mentoring her fellow prisoners to writing plays, she reveals how Christianity and an unshakable belief in God helped her persevere, using her time behind bars to make the prison around her a better place for others. Offering an intimate portrait of America's crisis of mass incarceration, Alice links social activism to her spiritual faith, and in the process makes a persuasive and poignant argument for the importance of achieving a justice that transcends politics.

Featuring sixteen pages of intimate, personal color photographs, After Life is a dramatic story of hope, mercy, and gratitude, a portrait that shows the realities of life behind bars and the importance of the ongoing struggle to end mass incarceration. A beacon of light in the darkness of despair, After Life serves as both a vital reminder of the power of redemption and of the importance of making second chances count.

"A moving, inspirational story that makes a powerful argument for sentencing reform."---- Kirkus Reviews
If the item details above aren’t accurate or complete, we want to know about it. Report incorrect product info.