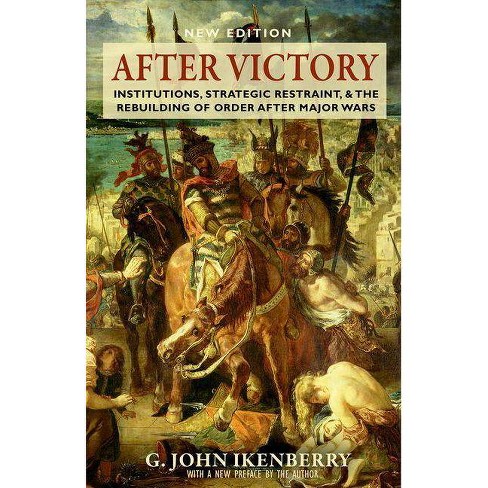 $17.69
0 out of 5 stars with 0 reviews
be the first!be the first! ratings
Shipping
Free standard shipping with RedCard
Help us improve this page

"For the third time in this troubled century and following the end of the Cold War and the tragic events in the former Yugoslavia, the world is challenged to create a stable and enduring world order. In this pathbreaking book, Ikenberry draws upon novel theoretical insights and historical experience to determine what policies and strategies work best as the United States attempts to lead in the struggles to create a new world order. . A major contribution to IR theory and to thinking about international order."--Robert Gilpin, Princeton University

"Through careful, thorough, and subtle analysis of the diplomacy of the post-war settlements of 1815, 1919, 1945, and 1989--91, John Ikenberry addresses in After Victory three major questions for the study of world politics: how do major-state victors seek to translate their military success into a sustainable political order; why do secondary-state partners accept the order so constructed by the major victors; and why have post-war settlements become progressively based on institutional principles and practices? In its theoretical boldness, historical sweep, policy relevance, and sheer elegance of analysis and presentation, few books published in the past quarter-century in the field of international relations are the equal of After Victory."--Joseph Grieco, Duke University

"After Victory is an extremely important inquiry into the origins of postwar order in international relations--the key analytic and policy issue of our time. Ikenberry's book is unique in its theoretical and empirical sweep. In contrast to realists, for whom international orders are epiphenomenal and transient, and constructivists, who see order emerging from shared worldviews and norms, Ikenberry adopts a historical sociological framework. He argues that states self-consciously create institutions to bind themselves and others in international orders that reduce the 'returns to power'."--David A. Lake, University of California, San Diego

"After Victory argues that political primacy is achieved best through a strategy of limiting the unilateral exercise of power. This book engages contemporary political debates, and it illuminates these debates with an informative set of historical case studies. All serious students of international relations and all practitioners of foreign policy will want to come to terms with John Ikenberry's elegant and learned analysis."--Peter Katzenstein, Cornell University