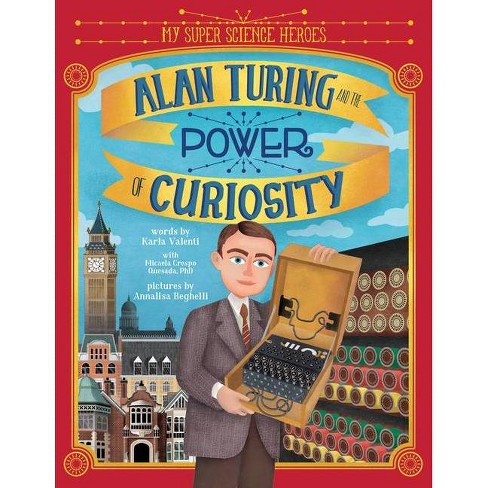 "One sunny day in June, a new super science hero was born. His name was Alan Turing. When Super Evil Nemesis calls on his minions to confound and confuse Alan because of his incorruptible curiosity and profound puzzle powers, it turns out he's not easy to defeat. This is the amazing (mostly) true story of how Alan Turing's superpower of curiosity helped him to become a spectacular scientist and change the world"--

This next book in the My Super Science Heroes series shares the amazing story of Alan Turing and how he used his astonishing superpower of curiosity to overcome obstacles and solve problems. This series is scientifically vetted and promoted by the Marie Curie Alumni Association, which promotes the worldwide advancement of knowledge.

As Alan grows and gains more and more knowledge, Super Evil Nemesis decides to call on his minion Ms. Enigma to confound and confuse Alan. But Alan likes puzzles and isn't easy to defeat...

Follow along as Alan uses his super curiosity to discover patterns, crack codes, and save the world! Includes a glossary, timeline, activities, and bonus facts about ciphers and codes.

In addition to being packed with biographical information and detailed illustrations, My Super Science Heroes drives home some of the qualities behind successful scientists. The books show young readers that just because we encounter problems doesn't mean we have to let them get in the way of our goals, or of what we believe is right. - Science Connected Magazine