All Fall Down ( Embassy Row) (Hardcover) by Ally Carter 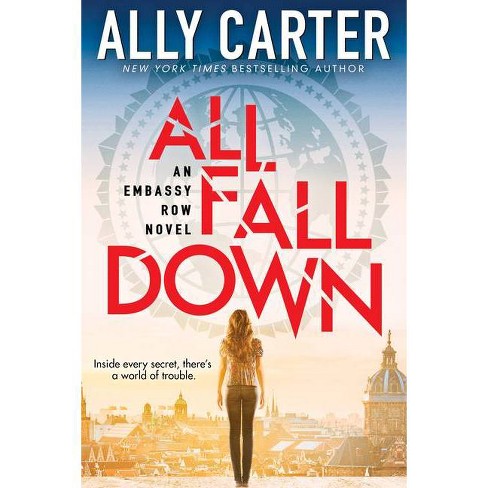 A new series of global proportions -- from master of intrigue, NEW YORK TIMES bestselling author Ally Carter.Grace Blakely is absolutely certain of three things:1. She is not crazy.2. Her mother was murdered.3. Someday she is going to find the killer and make him pay.As certain as Grace is about these facts, nobody else believes her -- so there's no one she can completely trust. Not her grandfather, a powerful ambassador. Not her new friends, who all live on Embassy Row. Not Alexei, the Russian boy next door, who is keeping his eye on Grace for reasons she neither likes nor understands.Everybody wants Grace to put on a pretty dress and a pretty smile, blocking out all her unpretty thoughts. But they can't control Grace -- no more than Grace can control what she knows or what she needs to do. Her past has come back to hunt her . . . and if she doesn't stop it, Grace isn't the only one who will get hurt. Because on Embassy Row, the countries of the world stand like dominoes, and one wrong move can make them all fall down.

Praise for the Heist Society series:

With razor-sharp dialogue, twists and tight squeezes galore, and one quick-thinking heroine, Carter doesn't miss a step as she continues to entertain her numerous fans --Booklist

Daring, delicious, but filled with a sense of purpose, Heist Society mixes classic elements of the adolescent bildungsroman into a high-stakes escapade. --School Library Journal

Praise for the Gallagher Girls series:

Ally Carter's light and engaging writing style will appeal to many young female readers looking for an adventure story about girls who are not afraid to fight their own battles. --Children's Literature

Ally Carter is the New York Times bestselling author of the Gallagher Girls, Heist Society, and Embassy Row series. Not If I Save You First is her first standalone novel. Her books have been published all over the world, in over 20 languages. She grew up on a farm in Oklahoma and has never caused an international incident (to her knowledge). You can visit her online at allycarter.com.
If the item details above aren’t accurate or complete, we want to know about it. Report incorrect product info.