All He Knew - by Helen Frost (Hardcover) 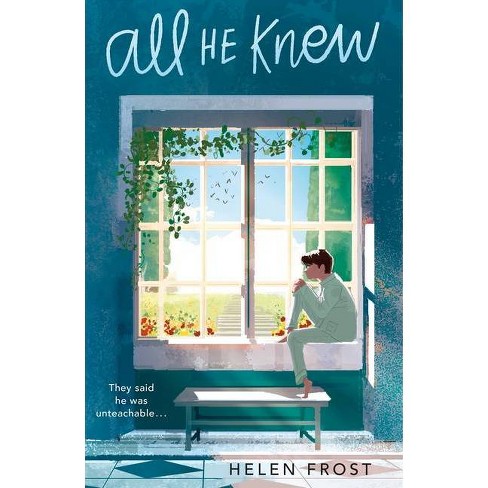 In 1939 six-year-old Henry, who is deaf, is taken from his family and placed in a home for the feeble-minded where, years later, his friends include a conscientious objector serving there during World War II. Includes historical notes.

A novel in verse about a young deaf boy during World War II, the sister who loves him, and the conscientious objector who helps him. Inspired by true events. Henry has been deaf from an early age--he is intelligent and aware of langauge, but by age six, he has decided it's not safe to speak to strangers. When the time comes for him to start school, he is labeled unteachable. Because his family has very little money, his parents and older sister, Molly, feel powerless to help him. Henry is sent to Riverview, a bleak institution where he is misunderstood, underestimated, and harshly treated. Victor, a conscientious objector to World War II, is part of a Civilian Public Service program offered as an alternative to the draft. In 1942, he arrives at Riverview to serve as an attendant and quickly sees that Henry is far from unteachable--he is brave, clever, and sometimes mischievous. In Victor's care, Henry begins to see how things can change for the better. Heartbreaking and ultimately hopeful, Helen Frost's All He Knew is inspired by true events and provides sharp insight into a little-known element of history.

"This must-have is an instant classic of historical fiction. . .Written in eloquent free verse and sonnets, it's an excellent poetry-teaching tool as well." --School Library Journal, starred review

"Frost's smooth, burnished verse, ranging from free verse to sonnets, unfolds the story nimbly. While the historically based picture of the institution and its view of disability is appropriately horrifying, the book carefully avoids turning this into a stereotypical rescue drama. . .The result is an absorbing story of a boy and his family oppressed by circumstances but, rewardingly, finding a way to rise above them. Extensive notes explore the history of conscientious objectors and the relative on whom the story is based." --The Bulletin for the Center of Children's Books, starred review "Frost brings Henry's experiences sharply into focus through her spare, evocative storytelling." --Booklist "In portraying Henry's perspective, Printz winner Frost deftly sketches his heightened senses and keen observations, such as regarding the institution's oppressive stench ("something like potatoes/ forgotten in a corner of the kitchen"). . .Frost balances descriptions of institutional abuse with strong characters and enduring hope." --Publishers Weekly "Full of historical richness and glimpses of the cruelty and abuse so common in the institutions of the era. Frost's interpretation is softened by the hopeful conclusion of Henry's return home and his introduction to American Sign Language." --The Horn Book

Helen Frost is the author of several books for young people, including When My Sister Started Kissing, Salt, Hidden, Diamond Willow, Crossing Stones, The Braid, and Keesha's House, which was selected as an Honor Book for the Michael L. Printz Award. She lives in Fort Wayne, Indiana.
If the item details above aren’t accurate or complete, we want to know about it. Report incorrect product info.