All Heathens - by Marianne Chan (Paperback) 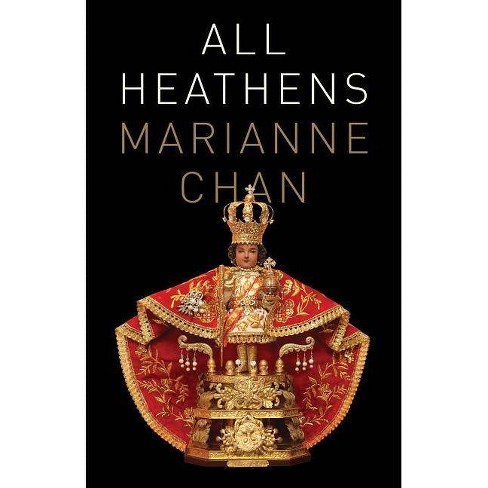 $12.49
new at target¬
no reviews yet
be the first!be the first! ratings
Shipping
Free standard shipping with RedCard
Loading, please wait...
Help us improve this page

Poets & Writers, "Page One: Where New and Noteworthy Books Begin"
"[Chan] considers how the erasure and realignment of an individual's identity, and an entire people's history, creates shockwaves that affect generations both in the Philippines and around the world. Chan's mournful poems are brimming with longing and anger and redemption as she takes control of her own story and of Filipino history."
--Booklist "In All Heathens, Marianne Chan weaves history with personal narrative to map the heart of the Filipino and Filipino American global community. Despite the many distances, there is enduring kinship across the time and space of the diaspora: 'Around the world, we are the same people, ' she writes. 'We have merely moved our feet.' And whether reimagining the origin story of Eve, charting the arrival of Ferdinand Magellan in the Philippines, or narrating her own memories, Chan proves that history is not static, but rather a living home."
--Poets & Writers, "10 Questions for Marianne Chan" "Chan's skillful debut is a lustrous collage of first-person, persona, and epistle poems populated with Filipino holiday reenactments, Catholic saints, karaoke, a chorus of family members, and the dead who insist on return and whose memory drives the speaker to seek a world beyond the colonialist history of her home country. . . . This debut tenderly articulates the intersection of cultural history, the loneliness of migration, and the generosity of familial love."
--Publishers Weekly "Chan has created a collection that is as irreverent as it is sacred, that offers sadness and laughter and death and bright, bright truth; it is a compass for a new kind of voyaging."
--The Arkansas International "Marianne Chan's brilliant debut collection masterfully develops themes of identity and the long-term effects of colonization."
--Largehearted Boy "Eagle-eyed, soulful, and irreverent, All Heathens  is a collection of gems. Under Marianne Chan's bright lens, Magellan's sixteenth-century Philippine arrival feels as immediate as a recent family disaster, while the everyday emblems of our current diaspora--karaoke lyrics, FaceTime, fruit from a balikbayan box--bear the weight of history. These poems look behind the staged photographs and beneath the published travel diaries, poignantly answering the lies and erasures in every official story we've heard about leaving or finding home."
--Mia Alvar "Marianne Chan is part of a thrilling new generation of poets for whom the stories and histories we know no longer suffice.  Instead, here are bold accounts of how the center and the margins have been reconfigured, how home and belonging are in variance with each other, and how the distance between the old world and the new world thrums with the intimacy and separation of a FaceTime chat.  When the outsiders, barbarians, and heathens finally tell the complicated truths of their experiences, the result is poetry like Chan's--brash and wise, piercing and transformative."
--Rick Barot "Marianne Chan's All Heathens  is a map that dissects the colonizer's maps, a mythmaking that dismantles the master's myths, a mouth powerful enough to delight in 'small, tender bites of the whale's enormous heart.' In these pages we meet 'Eve's Filipino half-sister' and 'a castle made of bones.' We meet 'ogres and white ladies.' We meet the question 'Which came first: / the coming or the desire / to come?' These poems are made from fire and laughter, airports and the most unexpected dream-portals. History and giddy longing walk hand in hand here. Here, where a 'ghost wears our raincoats' and 'perhaps the heart is the best navigator, / the captain-general / of the living.' Alive on every page, this book is a song that refuses to sing of anything less than the true, the piercing and true."
--Chen Chen "Marianne Chan's All Heathens  takes us on a journey that is constant journey, touching down in, among other places, the Philippines, Germany, Italy, and Lansing, Michigan. Moving like quicksilver from the 15th to the 21st  century with several stops in between, Chan's attention tends toward big subjects--religion, history, family--but her voice, her perception is personal, intimate, often hilarious, always authentic, always 'against the current, against the present, on this / king-unsanctioned circumnavigation.' All Heathens is a debut of the highest order, an exuberant and eye-opening ride across centuries and continents that will leave its reader bedazzled, befriended, and grateful for this vital new voice."
--James Kimbrell
br> "Marianne Chan, by virtue of a truly magical insight, knows that every one of our senses is both traveler and cartographer. Too, she has realized that nothing on earth is more exotic, more a terra incognita, than Love. This is an iridescent collection, a summons to color, mystery and solid ground."
--Donald Revell "In All Heathens, Marianne Chan charts a circumnavigation. As converts live with their origin stories, and ï¿½migrï¿½s discover the place of their births still inside them in the new world, so the poems in this debut collection affirm that 'the past is in front of you, /waiting to be re-found...' Mediating an animist tradition alongside the Christianizing of the Philippines by Magellan, and the ever-voyaging heathen she knows herself to be, Chan discovers 'that this story was never about us being owned, because we will always own ourselves.' The tenderness in these poems is only surpassed by the sweetness and skill of the poet's telling. All Heathens is a book that takes the whole trip."
--Claudia Keelan
If the item details above aren’t accurate or complete, we want to know about it. Report incorrect product info.