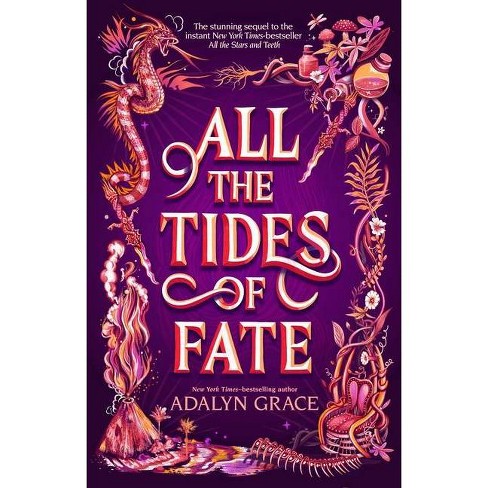 The sequel to bestseller All the Stars and Teeth, this high-stakes YA fantasy sails further into the dangerous magics of an island kingdom.

The thrilling sequel to instant New York Times bestseller All the Stars and Teeth, called "captivating" by Tomi Adeyemi, "Vicious and alluring" by Hafsah Faizal, and "phenomenal" by Adrienne Young. Now author Adalyn Grace is back with more high seas adventure in All the Tides of Fate, this electrifying fantasy, perfect for fans of Stephanie Garber's Caraval and Sarah J. Maas's Throne of Glass series.

Through blood and sacrifice, Amora Montara has conquered a rebellion and taken her rightful place as queen of Visidia. Now, with the islands in turmoil and the people questioning her authority, Amora cannot allow anyone to see her weaknesses. No one can know about the curse in her bloodline. No one can know that she's lost her magic. No one can know the truth about the boy who holds the missing half of her soul. To save herself and Visidia, Amora embarks on a desperate quest for a mythical artifact that could fix everything--but it comes at a terrible cost. As she tries to balance her loyalty to her people, her crew, and the desires of her heart, Amora will soon discover that the power to rule might destroy her. An Imprint Book Praise for All the Stars and Teeth: "Jam-packed with swashbuckling adventure, swoonworthy romance, and dark, lush magic." - Christine Lynn Herman, author of The Devouring Gray "If an epic sea fantasy filled with strange pirates and vengeful mermaids speaks to your interests, well...we may have found your favorite book ever....a tale of magic and second chances that's fresh and thrilling in equal measure." -Entertainment Weekly
One of Buzzfeed's Most Anticipated YA Books of 2020

Powerful....A touching end to a tale about cursed bloodlines, politics, and love.-Kirkus Reviews

Adalyn Grace graduated Summa Cum Laude from Arizona State University when she was 19 years old. She spent four years working in live theater and acted as the youngest ever managing editor of a nonprofit newspaper. During and after college, she studied storytelling as an intern on Nickelodeon Animation's popular animated show, The Legend of Korra. Adalyn splits time between San Diego and Arizona with her bossy cat and two dorky dogs, and spends her days writing full time while trying to find the city's best burrito. She is the author of All the Stars and Teeth.
If the item details above aren’t accurate or complete, we want to know about it. Report incorrect product info.