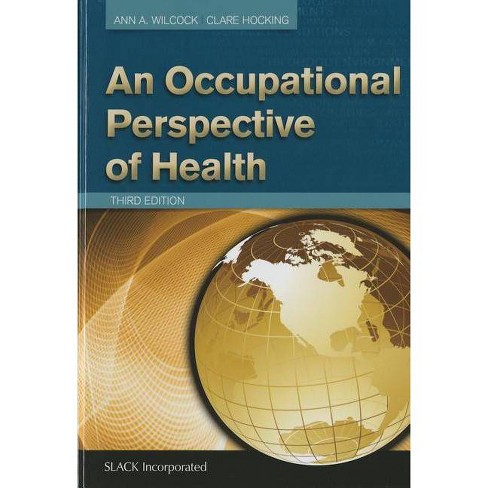 Ann A. Wilcock (nï¿½e Ellison), PhD, BAppScOT, GradDipPh, FCOT, was born in the United Kingdom and was brought up in the Lake District. She graduated as an occupational therapist from the Derby School in 1961, and worked at Black Notley Hospital and Farnham Park Rehabilitation Centre before going to live in Australia in 1964. There she worked in large general hospitals in New South Wales and Tasmania in a variety of fields, including mental health, orthopedics, geriatric medicine, and neurology.

Ann co-authored Help Yourselves--A Handbook for Hemiplegics and their Families in 1966, was the sole author of Occupational Therapy Approaches to Stroke in 1986. As commissioned historian to the British College and Association of Occupational Therapists, she authored Occupation for Health: A Journey from Self Health to Prescription in 2001, and Occupation for Health: A Journey from Prescription to Self Health in 2002. The first and second editions of this text, An Occupational Perspective of Health, were published by SLACK Incorporated in 1998 and 2006, respectively.


Clare Hocking, PhD, MHSc(OT), AdvDipOT, DipOT, was born and raised in New Zealand, sheltered by the hills of the Hutt Valley. Her early working life included periods as a clerical worker and time on the factory floor, inspecting components for telephone exchanges. Those experiences sharpened her sense of social justice, even before she knew that terminology.

Clare completed a Diploma in Occupational Therapy in 1982, then an Advanced Diploma in Occupational Therapy in 1989, both from the Central Institute of Technology in Heretaunga, New Zealand. In her first occupational therapy post in Christchurch, New Zealand, Clare gained experience in medical wards for older adults, long-stay wards for adults with profound musculoskeletal and neurological impairments, and with brief spells in hand therapy and burns wards. A move to Auckland, New Zealand in 1985 brought new opportunities running a vocational rehabilitation service for people recovering from traumatic brain injury, stroke, and multiple physical injuries, followed by a range of positions at one of Auckland's large psychiatric hospitals.

Gaining an Advanced Diploma opened the door to academia in the newly established occupational therapy program in Auckland in 1990. As an inaugural staff member, that involved a steep learning curve in lecturing, curriculum design, and student selection, as well as the demand for higher qualifications. Clare was fortunate to study occupational science under Ann Wilcock's tutelage. From there she took over the editorship of the Journal of Occupational Science, which Ann Wilcock had established, and Clare recruited Ann as her PhD supervisor. That pathway ultimately led to an appointment as New Zealand's first Professor of Occupational Science and Therapy in 2012.

Clare's early research was firmly grounded in occupational science, investigating the relationship between people and the things they make and use. That focus helped her form new insights into the identity issues associated with using assistive technologies, particularly wheelchairs and self-care equipment, and shed light on occupational therapy's move away from arts and crafts and toward mechanistic explanations of the therapeutic application of occupation for health. Supporting the growth of postgraduate education in New Zealand, Clare has subsequently supervised research in topics as diverse as living with motor neuron disease, the supervision of occupational therapists, the meaning of occupation, and how occupational therapists take up ideas from the professional literature.

Accordingly, Clare's extensive list of publications spans most of the English language occupational therapy journals and many key British and American texts. She has emerged as a critical voice within both occupational therapy and occupational science. Of note is her co-authorship of the World Federation of Occupational Therapists' Minimum Standards for the Education of Occupational Therapists, published in 2002. This ground breaking work positioned occupational science concepts as the basis of the profession's philosophy and practice. As co-chair of the Federation's International Advisory Group on Human Rights, Clare continues to influence the direction and focus of occupational therapy education. Also of note, she co-edited Critical Perspectives on Occupational Science: Society, Inclusion, Participation in 2012 with Gail Whiteford, the Pro-Vice Chancellor of Social Inclusion in Macquarie University in Sydney, Australia.