Anarchy--In a Manner of Speaking - (Anarchies) by David Graeber (Paperback) 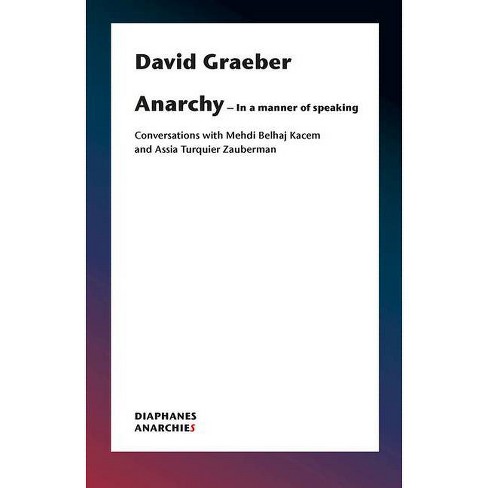 David Graeber is not only one of today's most important living thinkers, but also one of the most influential. He is also one of the very few engaged intellectuals who has a proven track record of effective militancy on a world scale, and his impact on the international left cannot be overstated. Graeber has offered up perhaps the most credible path for exiting capitalism--as much through his writing about debt, bureaucracy, or "bullshit jobs" as through his crucial involvement in the Occupy Wall Street movement, which led to his more-or-less involuntary exile from the American academy. In short, Anarchy--In a Manner of Speaking presents a series of interviews with a first-rate intellectual, a veritable modern hero on the order of Julian Assange, Edward Snowden, Linus Torvald, Aaron Swartz, and Elon Musk. Interviewers Mehdi Belhaj Kacem and Assia Turquier-Zauberman ask Graeber not only about the history of anarchy, but also about its contemporary relevance and future. Their conversation also explores the ties between anthropology and anarchism, and the traces of its DNA in the Occupy Wall Street and Yellow Vest movements. Finally, Graeber discusses the meaning of anarchist ethics--not only in the political realm, but also in terms of art, love, sexuality, and more. With astonishing humor, verve, and erudition, this book redefines the contours of what could be (in the words of Peter Kropotkin) "anarchist morality" today.
If the item details above aren’t accurate or complete, we want to know about it. Report incorrect product info.