And After the Fire - by Lauren Belfer (Hardcover) 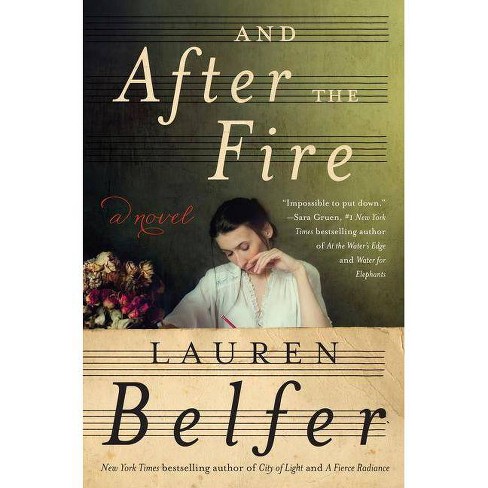 $20.49
MSRP$26.99
0 out of 5 stars with 0 reviews
be the first!be the first! ratings
Shipping
Free standard shipping with RedCard
Help us improve this page

This spellbinding new novel from Lauren Belfer, the New York Times bestselling author of A Fierce Radiance and City of Light, spans centuries and continents to reveal the secret history of a long-lost musical masterpiece--and the two women bound together by its troubled past.

Sara Itzig Levy, the daughter of Frederick the Great's banker, counts herself among the ï¿½lite of late-eighteenth-century Berlin. A gifted harpsichordist, she hones her musical talents under Wilhelm Friedemann Bach, a son of Johann Sebastian Bach. Kindred spirits, the elderly maestro and his protï¿½gï¿½e enjoy a close friendship, but their time together is running out. Friedemann's final gift to his dearest Sara is the original score of one of his father's cantatas--yet, as she reads its libretto, her gratitude turns to horror. . . .

In present-day New York City, Susanna Kessler enjoys a seemingly charmed life with a loving husband and a terrific job. Then a random, devastating act of violence tears it apart. Just as she's beginning to recover, her beloved Uncle Henry kills himself. He leaves behind a cryptic note alluding to his haunting World War II experiences as an Allied soldier in Germany, and to an artifact he took from the war-ravaged country before returning home.

Framed by Susanna's urgent search for the truth about the disturbing musical score her uncle bequeaths to her, Sara's richly atmospheric narrative--studded with vibrant, real-life musical figures from Wilhelm Friedemann Bach to Beethoven to Felix and Fanny Mendelssohn--reveals the passions and politics of Enlightenment- and Romantic-era Berlin.

Wealth might buy Jews an entrï¿½e into German society but, as Sara discovers, a dark anti-Semitism simmers all around her. And as Susanna attempts to fight her demons by plunging deeper and deeper into Sara's world, harrowing questions about her own family's past begin to surface.

Advance Praise for And After the Fire

"It's a remarkably suspenseful story, a literary thriller in the tradition of A. S. Byatt's Possession."--Kirkus reviews

"A 'what if' novel that begins in the glittering salons of Enlightenment Berlin where, beneath the surface, are sentiments too sinister to be named and culminates in New York present day, And After the Fire is an intellectual thriller and a beautiful love story. What if you came into possession of a historical artifact with the power to alter history and change the world? Sure to establish Belfer as a fearless, provocative writer. Impossible to put down."--Sara Gruen, #1 New York Times bestselling author of At the Water's Edge and Water for Elephants

"Brilliant and mesmerizing. . . . Since reading And After the Fire, I've been trumpeting it as the best novel I've had the pleasure of reading in years."--Elinor Lipman, New York Times bestselling author of Then She Found Me

"Enthralling. . . . Belfer's powerful portrayal of how people are changed in pursuit of a miracle makes this book an especially compelling read."--Nancy Horan, New York Times bestselling author of Loving Frank, on A Fierce Radiance

"A love story and murder mystery rolled into a panoramic family saga and industrial-espionage thriller. . . . Belfer's prose is heartbreaking, as are her twin themes of love and betrayal."--USA Today on A Fierce Radiance

"Impressive. . . . A stereopticon of a novel, sepia-tinged at the edges yet bursting with color at its center. . . . A powerfully atmospheric book."--New York Times on City of Light