And by Fire - by Evie Hawtrey (Hardcover) 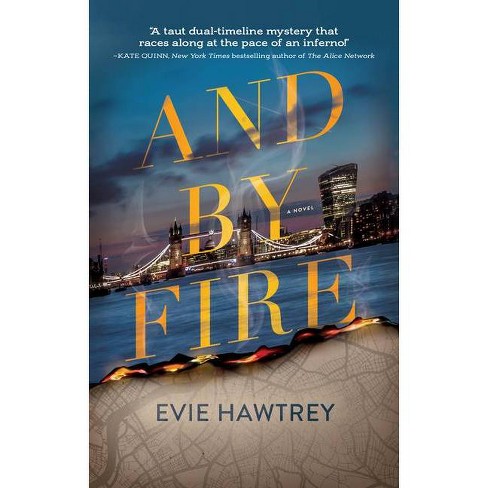 A Detective Inspector with the City Police, Nigella Parker, teams up with her ex of Scotland Yard to track down a serial killer who is creating sculptures around London using burnt human flesh and becoming the "artist's" unwitting next targets.

Tempered by fire and separated by centuries, two extraordinary female detectives track a pair of murderous geniuses who will burn the world for their art in this mystery perfect for fans of Sarah Penner and Dan Brown. Nigella Parker, Detective Inspector with the City Police, has a deeply rooted fear of fire and a talent for solving deadly arson cases. When a charred figure is found curled beside Sir Christopher Wren's Monument to the Great Fire of London, Nigella is dragged into a case pitting her against a murderous artist creating sculptures using burnt flesh. Nigella partners with Colm O'Leary of Scotland Yard to track the arsonist across greater London. The pair are more than colleagues--they were lovers until O'Leary made the mistake of uttering three little words. Their past isn't the only buried history as they race to connect the dots between an antique nail pulled from a dead man's hands and a long-forgotten architect dwarfed by the life's work of Sir Christopher Wren. Wren, one of London's most famous architects, is everywhere the pair turn. Digging into his legacy leads the DCIs into the coldest of cold cases: a search for a bookseller gone missing during the Great Fire of London. More than 350 years earlier, while looking for their friend, a second pair of detectives--a lady-in-waiting to the Queen and a royal fireworks maker--discovered foul play in the supposedly accidental destruction of St. Paul's Cathedral...but did that same devilry lead to murder? And can these centuries-old crimes help catch a modern-day murderer? As Nigella and O'Leary rush to decode clues, past and present, London's killer-artist sets his sights on a member of the investigative team as the subject of his next fiery masterpiece.

Praise for And By Fire
"[Readers will] root for both heroines."
--Kirkus

"Well-developed characters will appeal to fans of historical mysteries or police procedurals and to Anglophiles."
--Library Journal

"At the same time entertaining and enlightening, the narrative reveals how established monuments to the past sometimes keep inaccuracies alive and how largely forgotten events and figures can fester."
--Historical Novel Society "[An] atmospheric, absorbing mystery."
--First Clue

Bones meets the Restoration Court in Evie Hawtrey's And By Fire, a taut dual-timeline mystery that races along at the pace of an inferno! When London detective Nigella Parker teams up with her Scotland Yard ex-lover to solve a tricky arson case, she never imagines it will lead her to a centuries-old mystery . . . and another pair of unlikely sleuths from the court of Charles II. As Nigella and her partner race through 21st century London to find a serial killer who sculpts in fire-burned flesh, and a 17th century fireworks-maker and royal lady-in-waiting struggle to find the truth behind the destruction of St. Paul's during the deadly Great Fire of London, all four lives will hang in the balance. Fresh, dynamic, and crisply researched, And By Fire will appeal to histfic fans and mystery readers alike--I couldn't put this one down!
--Kate Quinn, New York Times bestselling author of The Alice Network "You'll smell the smoke, taste the ashes, and feel the tension as you race through this exquisitely researched crime thriller. The plot twists and unforgettable images evoked by Evie Hawtrey's And By Fire will linger long after you turn the last page!"
--Ellen Marie Wiseman, New York Times bestseller of The Orphan Collector "You'll burn through the pages of this time-twisty thriller!"
--Mindy McGinnis, Edgar Award winning author of A Madness So Discreet "Two determined women, separated by more than three centuries, struggle to uncover a deadly secret that burns at the heart of London. This is a taut and suspenseful read, rich in history and human drama. You won't soon forget it!"
--Nancy Bilyeau, author of The Blue

Evie Hawtrey is a Yank by birth but a sister-in-spirit to her fierce and feminist London detective, DI Nigella Barker. Evie splits her time between Washington DC, where she lives with her husband, and York, UK, where she enjoys living in history, lingering over teas, and knocking around in pubs.
If the item details above aren’t accurate or complete, we want to know about it. Report incorrect product info.