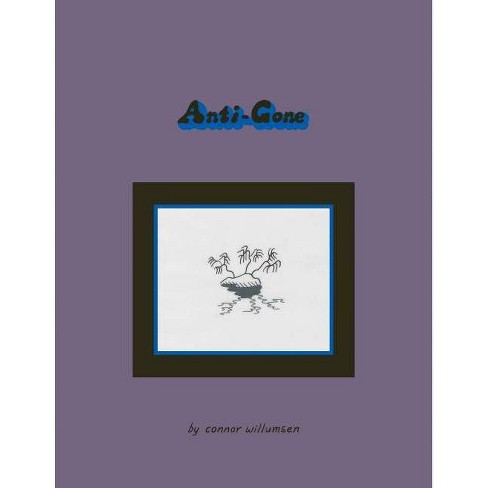 $13.39
MSRP$18.00
no reviews yet
be the first!be the first! ratings
Shipping
Free standard shipping with RedCard
Loading, please wait...
Help us improve this page

"Readers who enjoy the boundary-pushing work of cartoonists such as Dash Shaw and Olivier Schrauwen will freely surrender to Willumsen's equally dreamlike world." -- Publishers Weekly "Connor Willumsen is a blackbelt of formalism in comics. There is an unending sense of "thinking" in this book. Every angle and every option is considered." -- Caleb Orecchio, Comics Workbook "All the big questions are here, essentially, if you give enough of your attention to see them there: The book demands, and rewards, giving it all you have." -- Brian Nicholson, Longbox Coffin "From beginning to end, Willumsen pushes you in the deep end and forces you to tread over adroit uncertainty, using water as a stand-in for not only the fragile nature of nostalgia and relationships, but your very own mind. Anti-Gone is about all these things. At least I think so." -- RJ Casey, The Comics Journal "Connor Willumsen's first graphic novel, Anti-Gone, beautifully follows a couple who drift on a small boat and go see a movie on drugs. It felt to me a bit like a Tao Lin novel in that it focuses on young people who spend their time shopping for clothes and entertainment/drugs." -- Dash Shaw, The Comics Journal "Willumsen's [Anti-Gone] might be the indie house's crowning glory." -- Abraham Riesman, Vulture "Illustrated with a virtuoso command of pose and movement, with imaginative and surreal flourishes throughout, Anti-Gone is one of the year's most impressive releases." -- Gosh! Comics "With beautiful line art, Willumsen tells one of the oddest stories of the year, but also one of the most visually compelling and formally striking." -- Shea Hennum, The A.V. Club "You get an odd combination of super contemporary, minimalist, and economical cartooning - the sort of artistic sensibility you expect from a young author, but with a maturity of voice suggesting a master playwright or screenwriter." -- Peter Birkemoe, Quill & Quire "Willumsen's fantasy involves two tourists, Spyda and Lynxa, who explore an island that turns into a futuristic city or an apocalyptic nightmare depending on what drugs they're taking." -- Heidi MacDonald, The Comics Beat "Willumsen's book demands that you spend time looking at it from multiple angles, then trusts you to make up your own mind." -- Ryan Carey, Daily Grindhouse "Anti-Gone is likely one of the strongest long-form formalist comics published this year. Willumsen's pages made me gasp, and flinch, and read and re-read, and re-read." -- Alex Hoffman, Sequential State "Book of the year for me, and probably an absolute game-changer for a generation of cartoonists about to emerge" -- Brian Nicholson, The Comics Journal "But the beauty of comics, by virtue of their immersive nature, is that you're sometimes forced to see things in a different way. And in Anti-Gone, that's what Connor Willumsen does in spades." -- Tom Murphy, Broken Frontier "With this book Connor has really made the reader--with the dialogue, with the cartooning, with the sequencing--free to explore this space, and it's just amazing to read." -- Sam Ombiri, Comics Workbook
If the item details above aren’t accurate or complete, we want to know about it. Report incorrect product info.