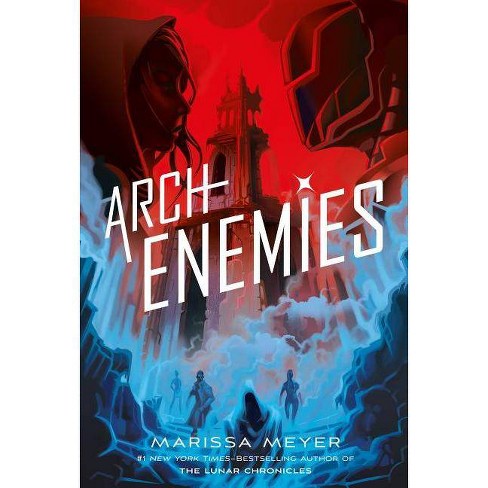 The Renegades Trilogy continues in this fiercely awaited second installment from the #1 "New York Times"-bestselling author of the Lunar Chronicles.

The Renegades Trilogy continues, in this fiercely awaited second installment after the New York Times-bestselling Renegades by Marissa Meyer, author of the Lunar Chronicles.

Time is running out.
Together, they can save the world.
But they each other's worst nightmare. Nova's double life is about to get a lot more complicated: As Insomnia, she is a full-fledged member of the Renegades, a syndicate of powerful and beloved superheroes. She works with Adrian's patrol unit to protect the weak and maintain order in Gatlon City. As Nightmare, she is an Anarchist - a group of of villains who are determined to destroy the Renegades. Nova wants vengeance against the so-called heroes who once failed her when she needed them most. But as Nova, her feelings for Adrian are deepening, despite the fact that he is the son of her sworn enemies and, unbeknownst to Nova, he has some dangerous secrets of his own. In this second installment of the Renegades trilogy, Nova, Adrian, and the rest of their crew - Ruby, Oscar, and Danna -- are faced with escalating crime in Gatlon City, while covert weapons and conflicting missions have Nova and Adrian questioning not only their beliefs about justice, but also the feelings they have for each other. The line between good and evil has been blurred, but what's clear to them both is that too much power could mean the end of their city - and the world - as they know it.

Meyer is fantastic with superpowers, and the best moments in the book involve ingenious or breathtaking displays of ability, as well as entertaining hints of a centuries-long prodigy history. ... the page-turner conclusion will leave readers eager for the final installment.--Publishers Weekly

Adrian and Nova, two teen superheroes, have a lot in common: a problematic hidden identity, a secret plan to avenge a family member's death, and a growing attraction to each other that is impossible to indulge simply because of who they are. ...This enticing mix of superhero adventures and budding love story also tackles hefty ethical issues, and Meyer masterfully manipulates plot and characters to send readers racing for the last page and regret reaching it, especially when they're met by its suspenseful cliff-hanger.--Booklist


Praise for RENEGADES, Book One of the Renegades Trilogy A NEW YORK TIMES BESTSELLER!! A Winter 2017-2018 Kids' Indie Next List Selection In a vividly dark and fully imagined universe where special abilities are feared unless they can be strictly controlled and labeled, Meyer celebrates and subverts popular superhero tropes while mining the gray area between malevolence and virtue. Third-person narration builds suspense as it shifts between Nova and Adrian, a Renegade with his own secrets; the worldbuilding details and many combat sequences will captivate devotees of superhero comics. Beyond the capes and masks is a strikingly grounded story of star-crossed would-be lovers, deception, and the recognition that most of humanity exists between the extremes of good and evil.--Publishers Weekly, starred review

Tackles a familiar genre in a brand new way.--Hypable.com A fully realized new world with compelling characters and just enough edge-of-your-seat action to rival the biggest on-screen adaptation?.--Bustle Exciting...perfect for your Fall #TBR list.--PopSugar.com Even reluctant fans of hero fantasies will fall for the smart plot and wonderful world-building. Prepare to fangirl.--Justine Magazine Meyer delivers a balance between intricate world-building and fast-paced action sequences. Nova's childhood tragedy will draw sympathy from readers as they watch her integrate into the group of Renegades in order to seek vengeance. Back-stabbing, plot twists, and hidden agendas will have readers turning pages in an attempt to discover the truth.--School Library Journal Meyer smartly refrains from focusing totally on Adrian and Nova's potential romance and instead fleshes the characters out as separate individuals with flaws and strengths, regrets and desires. ...The world is exceptionally well crafted, particularly the complex backstory of the rise of prodigies among humans, and the secondary cast of villains and heroes could give Marvel and DC a run for their money. There's a lot going on here besides cool names and superpowers, and the book earns both its hefty page count and its expected sequel.--Bulletin of the Center for Children's Books, Recommended