Army of Darkness/Xena, Warrior Princess: Forever and a Day - by Scott Lobdell (Paperback) 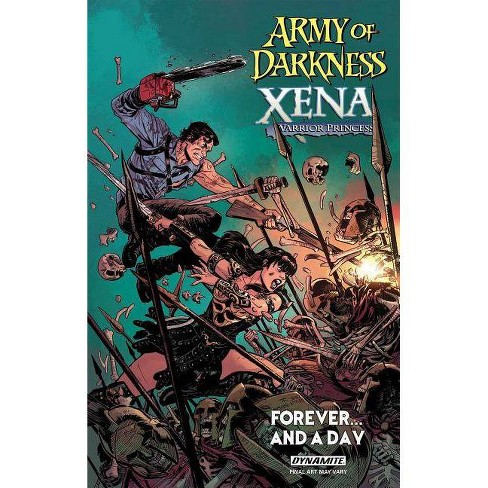 $14.39
no reviews yet
be the first!be the first! ratings
Shipping
Free standard shipping with RedCard
Loading, please wait...
Help us improve this page

Xena, Warrior Princess, has toppled nations through the force of her will. She's captained the most deadly pirate crew ever to sail the seas. She even turned her back on her past, seeking redemption for her darker acts alongside her partner Gabrielle. And yet, despite her propensity for defeating all odds, her thousand-strong army has fallen to an implacable and ancient evil. Her only recourse? To use the dreaded Necronomicon to summon Ash Williams - the wise-ass, butt-kicking, smooth-talkin' demon-killer from the future - for aid! But how can Xena save the world when that chainsaw-wielding knucklehead's every temporal mishap threatens to unravel time itself? Cult favorite media sensations Army of Darkness and Xena, Warrior Princess collide in a wildly hilarious adventure written by Scott Lobdell (Red Hood and the Outlaws, Uncanny X-Men) and featuring artwork by Elliot Fernandez and Diego Galindo! "A superlative job of capturing the spirit of both Xena, Warrior Princess and Ash of Army Of Darkness." - SciFiPulse
"Lobdell balances the personalities of his distinct cast and Fernandez's layouts are superb." - Nerds on the Rocks
"(Lobdell's) dialogue is hilarious and flows very well." - Big Glasgow Comic Page
If the item details above aren’t accurate or complete, we want to know about it. Report incorrect product info.