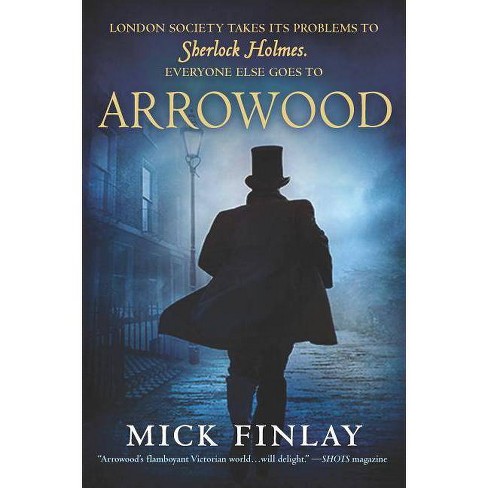 $11.99
MSRP$15.99
no reviews yet
be the first!be the first! ratings
Shipping
Free standard shipping with RedCard
Help us improve this page

Named one of the TOP 12 MYSTERY NOVELS OF 2017 by The Strand Magazine. "The Victorian workingman's answer to the higher-class Sherlock Holmes-a foul-mouthed, hard-drinking, shabby detective with a seriously bad attitude toward his more famous counterpart.... It's a terrific premise... Finlay has fun referencing the Holmes canon, and he gives his hero a skill that the more famous detective lacks" -The Seattle Times
(Summer's Hottest Crime Titles Round Up) "If you ever thought the Sherlock Holmes stories might benefit from being steeped in gin, caked in grime and then left unwashed for weeks...Mick Finlay's 1895-set detective debut is for you." --Crime Scene "How I loved this book. Arrowood is an almost infuriatingly absorbing, awkward and brilliant character. I wanted to start his next mystery with him as soon as I'd finished his first. More than that, Arrowood feels strangely like he's always existed, we're only now being treated to an introduction. Mick Finlay's atmospheric, detailed, singular London is a terrifying place I hope to return to again and again." - Ross Armstrong, bestselling author of The Watcher "Arrowood is a flawed but engaging hero and the plot spins from peril to twist and back with real panache.... Finlay's debut marks the start of a new series that historical crime fans will be clamouring to read more of." --The Times of London "Finlay debuts with a tale built on a wonderful premise: a downscale Sherlock Holmes for the rest of us... Finlay has a fine time recasting the friendship between Holmes and Watson, as Arrowood and Barnett repeatedly quarrel, swap obscenities and threats, and pummel each other."
-Kirkus Reviews "Fiercely edgy... Finlay captures the filth, frustration, and dark humor of the Victorian-era slum, plopping the reader into the story among the odoriferous, life-encrusted characters... Doyle's fans will be entertained."
-Booklist "A plausible alternative to Sherlock Holmes... [with a] reputation for muckraking."
-Publishers Weekly "Fans of Sherlock Holmes might appreciate an alternate view of Victorian London from the perspective of people struggling to survive."
-Library Journal
If the item details above aren’t accurate or complete, we want to know about it. Report incorrect product info.