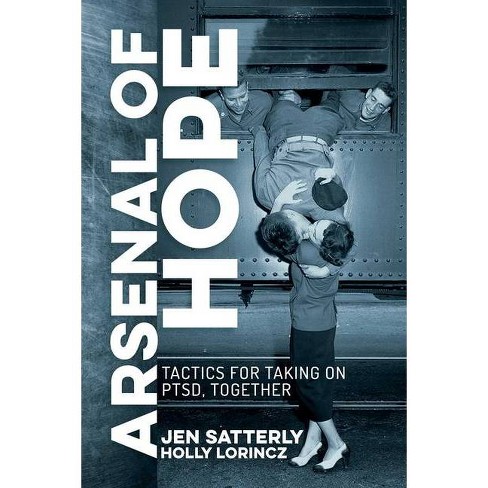 A guide that empowers family members combating post-traumatic stress on the home front, offering hope, purpose, and tangible solutions. This book provides definitions and real-life examples of complex PTSD and complex secondary PTSD (seen in a rapidly rising number of spouses and children), and the problems that arise when untreated. Arsenal of Hope aims to help soldiers, first responders, their families, and civilians with trauma--including those dealing with COVID-19 chaos or death. Jen Satterly is a certified coach and respected authority on PTSD, having been embedded with Special Operations during large scale military training missions and married to a Delta Force Command Sgt. Major. As a cofounder of a nonprofit for warriors and their families to heal after the trauma of war, her stories, research, realistic advice, and sometimes humor, are told through a military lens. Written with award-winning collaborative writer Holly Lorincz, Satterly uses her firsthand knowledge and medical expertise to deal with each issue. Most importantly, she illustrates how to change and create habits to circumvent the symptoms of post-traumatic stress.

"Arsenal of Hope by Jen Satterly and Holly Lorincz is above all, a love story. It's a love story that unfolds on two levels. On one level, it's the story of two people who love each other--a warrior and his 'warrior wife' who confront his demons together. Jen and Tom Satterly give readers a realistic and compelling narrative of a couple who learns to walk through the valleys together--when rage is the third party in the relationship. On another level, it is about the love that Tom and Jen Satterly feel for those in their tribe. This love is given voice in the beautiful vulnerability they display is sharing their story. Arsenal of Hope echoes with the universal truth that resilience is not about being an 'Army of One.' True resilience is about how we create interdependence and draw from the strength of those in our tribe. Arsenal of Hope is about how grit shows up when you commit yourself to the soul of another person, the ability to see through the fog of mental warfare into the heart of a warrior, and how those of us who support warriors can hold our center while fighting for those we love." -Doc Shauna Springer, Ph.D., Bestselling Author of "Beyond the Military: A Leader's Handbook for Warrior Reintegration" and the newly released book, "Warrior: How to Support Those Who Protect Us"

"Jen is a force. She is an incredible human with a unique ability to express her strength and vulnerability simultaneously. If you or a loved one is living with PTSD--managed or unmanaged--you will likely benefit from reading this. Jen brings a perspective to the table which has the potential to move mountains for anyone willing to listen and apply. I don't want to intentionally limit affected by PTSD to check it out--it isn't a combat family exclusive reality. Trauma is trauma." -Sarah Kelly, Special Operations warrior family advocate

"Jen Satterly shares compelling and powerful personal stories on the insidious nature of post-traumatic stress. More importantly, she shines a bright and unwavering light on the path to recovery, forgiveness, and freedom. The good news is there is hope--and it starts with having the courage to be vulnerable. I'm grateful for brave people like Jen with the courage to lead by example, share their story, and show us the way." -Colonel Stu Farris, American Soldier, Husband, and Father

"Jen's clear and unvarnished storytelling is a courageous effort to walk with anyone hesitant or afraid of seeking help to confront and overcome the devastating effects of PTSD. Arsenal of Hope is an essential read for anyone trying to understand the effects of PTSD, those struggling to support someone in the depths of their struggle, or those who simply need to know they are not alone." -KaLea Lehman, the Executive Director and Founder, Military Special Operations Family Collaborative

"Tom and Jen Satterly's focus on PTSD of Special Operation soldiers was created by the horrors of war and carried forward in its aftermath when they return home and confront resuming a normal life. Tom and Jen's Special Forces credentials are hard-earned and their experiences at home establish their awareness of the life-threatening consequences if PTSD is not treated. Jen had up-close exposure after spending three years embedded with Special Operations on stateside mission training. They confronted and solved Tom's serious PTS issues and committed to helping others through their All Secure Foundation. PTS is a soldier's invisible enemy because it's an internal response to the emotional, mental, and physical realities of battles. For the great majority of Americans who once again are honoring our military personnel's efforts to preserve and protect American values, the material in Arsenal of Hope reinforces our admiration, gratitude, and respect for their service. It also increases our awareness of the need to support their PTS struggles. Solutions benefit the entire family. They deserve all we can do to help." -Tony La Russa, Hall of Fame Manager, Three-Time World Series Champion

JEN SATTERLY owned an advertising and film/photography studio in St. Louis, creating award-winning work for over ten years. Jen has a passion for service and worked with several nonprofits, including Pujols Family Foundation, where she spent time in the Dominican Republic on a medical relief mission as the documentarian. After years in advertising in the commercial sector, Jen helped to form an elite Special Operations military contracting company as Director of Film and Photography. Jen embedded with and filmed Navy Seals, Green Berets, and Army Rangers on large scale Realistic Military Exercises for over three years. While working with Special Operations Command, Jen saw a serious need for PTS recovery and became certified as a health coach to better understand the role nutrition, mental health, and emotional health played in healing from the invisible wounds of war. Jen immediately began to donate her time and efforts to hundreds of Special Operations veterans and their spouses to regain their health and combat the effects of PTS. Jen, along with her husband Tom, cofounded All Secure Foundation to serve the Special Operations warriors and their families. She serves as co-CEO. HOLLY LORINCZ is an award-winning author, a nationally recognized speaking coach, and a longtime writing instructor. She's also a successful collaborative writer, recently ranked #7 in Amazon's Kindle Biography/Memoir writers. Holly reached the top #25 overall with her last collaborative nonfiction book Crown Heights, based on a major movie and used to launch a publishing imprint within Amazon. Holly has books published or in production with St. Martin's Press, Skyhorse Publishing, and Benchmark Press. Her first novel, Smart Mouth, won the national 2014 Bronze IPPY Award in Fiction and is optioned for a TV series. Besides being a professional writer, Holly has been editing books for over twenty years, working with multiple New York Times bestselling authors. She officially established Lorincz Literary Services in 2010. Once a teacher and a debate coach, and before that the editor-in-chief of a literary magazine, she loves working with stories that will help better the world.
If the item details above aren’t accurate or complete, we want to know about it. Report incorrect product info.