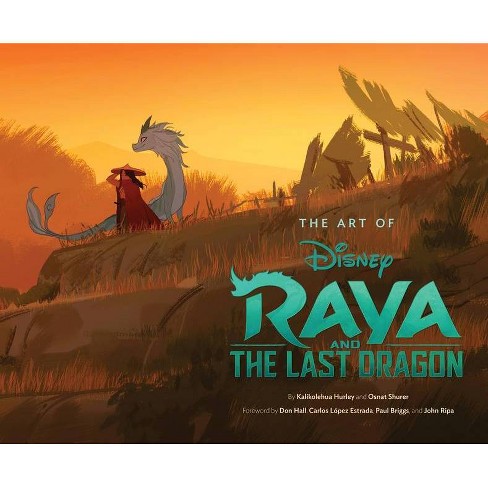 With never-before-seen development art, character sketches, storyboards, and color scripts, The Art of Raya and the Last Dragon gives fans a front-row view of the making of the Walt Disney Animation Studios' animated feature. - Art book from the new Disney film, Raya and the Last Dragon
- Features colorful concept art from the all-original fantasy adventure
- Includes fascinating facts and details from the creators It's an exclusive look inside the studio as Disney's talented team of artists develop characters and create the Raya and the Last Dragon universe, inspired by the diverse cultures of Southeast Asia. In Raya and the Last Dragon's fantasy world of Kumandra, humans and dragons once lived together in harmony. But when sinister monsters known as the Druun threatened the land, the dragons sacrificed themselves to save humanity. Five hundred years later, those same monsters have returned, and it's up to a lone warrior, Raya, to track down the last dragon in order to finally stop them for good. The Art of Raya and the Last Dragon is part of the acclaimed ART OF series, which invites audiences behind-the-scenes of their favorite animated films. This book is perfect for:
- Disney fans and art buffs
- Animators and students of animation
- Fans of The Art of Frozen 2 and The Art of Moana (c)2021 Disney Enterprises, Inc. All Rights Reserved.

"If you enjoyed the film, you'll appreciate this peek behind the curtains."

5 out of 5 stars
Patricia - 9 months ago
I devoured this book from cover to cover. I loved learning more about the creation of the characters and worlds of Kumandra. The art is spectacular. One of my favorite 'Art of' books. A great gift.
Did you find this review helpful?