As a Man Thinketh - by James Allen (Hardcover) 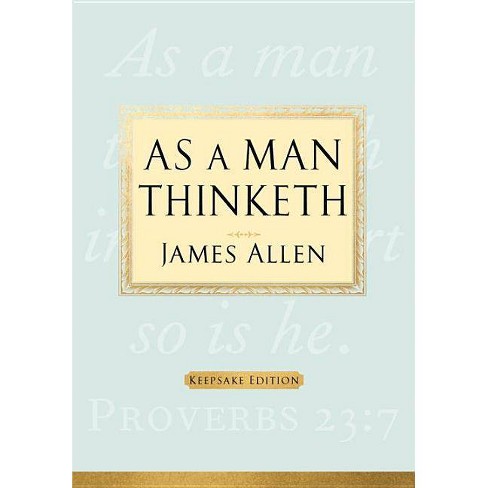 This handsome edition of the beloved and bestselling inspirational classic features the complete original text plus a special bonus work, "Eight Pillars of Prosperity," Allen's final and most practical work.

This handsome lifetime edition of the beloved and bestselling inspirational classic features the complete original text plus a special bonus work: Eight Pillars of Prosperity, James Allen's final and most practical work. Few modern books of inspiration have touched as many lives as James Allen's As a Man Thinketh. It is a truly transcendent work that has sold millions of copies since it first appeared in the early twentieth century, and continues to reach countless readers in the twenty-first. Now, in time for the holiday season, this devotional landmark receives perhaps its most beautiful publication ever with this special keepsake edition, featuring: - matte jacket - one-piece cloth casing with gold stamping and black inlaid text
- gold-ribbon place marker
- acid-free paper
- two-color printed endpapers
- glossy frontispiece image of the author
- author time line, bibliography, and biography The compact narrative of As a Man Thinketh is accompanied by a rare bonus book by James Allen: Eight Pillars of Prosperity. It is the author's last work, from 1911, and his most hands-on and practical. Here is the perfect volume to give as a gift (including to yourself!), cherish as an heirloom, and read for a lifetime.

James Allen was born in Leicester, England, in 1864. He took his first job at age 15 to support his family, after his father was murdered while looking for work in America. Allen was employed as a factory knitter and a private secretary until the early twentieth century, when he became increasingly known for his motivational writing. His 1903 work As a Man Thinketh earned him worldwide fame as a prophet of inspirational thinking and influenced a who's-who of self-help writers, including Napoleon Hill, Dale Carnegie, and Norman Vincent Peale. Allen died at age 47 in 1912.
If the item details above aren’t accurate or complete, we want to know about it. Report incorrect product info.