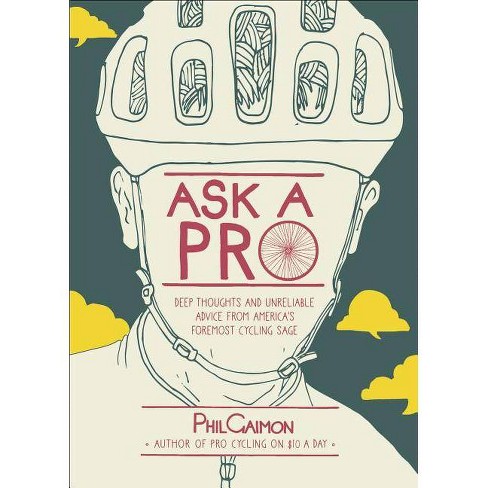 $13.49
MSRP$17.95
no reviews yet
be the first!be the first! ratings
Shipping
Free standard shipping with RedCard
Loading, please wait...
Help us improve this page

"Much of Pro Cycling on $10 a Day spins as pure pleasure--an inside account of what it's really like to race for a living and occasionally be among the sport's elite...The best parts read like an unpretentious insider's diary, full of the kind of wisecracks, gossip and advice traded on memorable long rides." -- Wall Street Journal

"At a time when pro cycling has struggled with its image, Phil Gaimon has emerged as a refreshing voice from the peloton -- intelligent, humorous, articulate, and above all, transparent. As a college-educated latecomer to the sport, as an outsider who struggled to be given a chance, and as someone with the perspective to laugh at the absurdity of being paid to ride a bicycle for a living, Gaimon's insights into the pro cycling world resonate with a wide audience. His self-effacing humor, commitment to clean sport, and extraordinary talent have made him a bit of an everyman hero within pro cycling -- a rider you want to hear from, and know more about, win or lose." -- Velo magazine

"In this age of tell-all memoirs from cyclists popped for doping, Pro Cycling on $10 a Day by Phil Gaimon is a refreshing change...It's a witty, revealing look at cycling that will make you want to quit your job and start training for the Tour." -- Bicycling magazine

"Having watched Phil race over the past few years we know he is a great, versatile rider with a huge amount of talent. Beyond that, he is also funny, smart and unique addition to the team. We think he'll be a great fit both on the road and off and we look forward to helping him take the next step in his career." -- Jonathan Vaughters, CEO, Team Garmin-Sharp

"An outspoken proponent of clean competition, Gaimon sports a tattoo of a bar of soap with the world 'clean' on his right bicep, and he was attracted to Garmin-Sharp for its ethical code." -- CyclingNews.com

"For anyone who's ever dreamed about having the glamorous life of a pro cyclist, Phil Gaimon's Pro Cycling on $10 a Day serves up some realistic--and hilarious--truths. From the uncertain process of finding a team, to dealing with performance setbacks and achievements, to the crazy stuff riders see while traveling, Gaimon provides an engaging portrait of life on the road as a domestic pro. The best part: Even through the toughest moments of his cycling career, Gaimon's dedication to and love for his sport shines through--which is something any rider can relate to, pro or not." -- Bicycling.com

"Pro Cycling on $10 a Day is the story we all want to hear: a regular guy who rides from overweight amateur to European pro in a short time, finding his way and making the best decisions from the resources he had. Phil's story inspires hope in up-and-comers about what hard work can produce. If you listen, pay attention and surround yourself with the best people you can, then no dream is out of touch." --Jeremy Powers, professional cyclist for Jelly Belly Cycling Team and Team Rapha-Focus and two-time U.S. Cyclocross National Champion

"We have discovered a light-hearted, hard-working rider with strong convictions." --Podium Cafï¿½

"Pro Cycling on $10 a Day gives you an incredibly realistic and entertaining feel for what goes on in the minor leagues of pro cycling. It's also the best--by far--of the current crop of cycling autobiographies." -- FatCyclist.com

"I believed in Phil and he worked hard to make the best of his opportunity in racing. He lived out of his car, trained hard, drove hours to get to races, and always showed up ready to fight at each race. He didn't have it easy... I never knew what was going to come out of Phil's mouth but I always knew he would race himself into the ground to try and win for himself or the team." -- Frankie Andreu, Team Director, 5-hour ENERGY presented by Kenda, 9-time Tour de France finisher, and 2-time Olympic cyclist

"The truth is you should buy and read Pro Cycling on $10 a Day because it's a ******ing awesome book about the love of bike racing...A hilarious and gripping account of the gypsy life of a domestic pro." -- NYVelocity

"Phil Gaimon's book is so entertaining and funny and honest and insightful that I could not stop to make notes, mark pages or even begin to build a more thoughtful review. I was too hooked to break the spell for even a moment...Take a raucous and wild ride with Gaimon as he jumps off that fat boy couch and fights his way -- with great humor -- to his dream." -- A Twisted Spoke

"Pro Cycling on $10 a Day is a highly compulsive, humorous and insightful look at the life of an ambitious workaday professional cyclist as he strives for a chance at the big-time." -- The Washing Machine Post

"This is an true underdog story about how one man transformed his very average life into one that is worthy of my time to read." -- Bicycle World TV

p>"The first thing you'll notice about Phil's house is a sit-up bench in his living room instead of a TV. The next thing is all the framed Calvin and Hobbes cartoons on the walls. In the strip, Calvin's bike was always trying to kill him and this was true for Phil when he needed race results so bad, he was willing to risk it all. Phil's book tells the story of the guy who mastered his bike, worked hard, and finally found a contract that pays a little more than $10 a day." -- Gwen Jorgensen, professional triathlete, Olympic athlete, and two-time U.S. National Champion

"Expect to laugh at his mistakes, learn important techniques--like how to make sweet tea in a hotel room or how to properly tackle a corner in a crit race--and realize what it takes to compete at the top." -- Triathlete magazine

"Phil Gaimon embodies what every aspiring cyclist wants to be: skinny, fast, and clean. He attacked his dream of going pro so hard he ended up in a nightmare with me. Read his book and you'll realize that Phil speaks the truth: bike racing is hard, but becoming a pro is even harder." -- Brad Huff, professional cyclist for Optum presented by Kelly Benefit Strategies