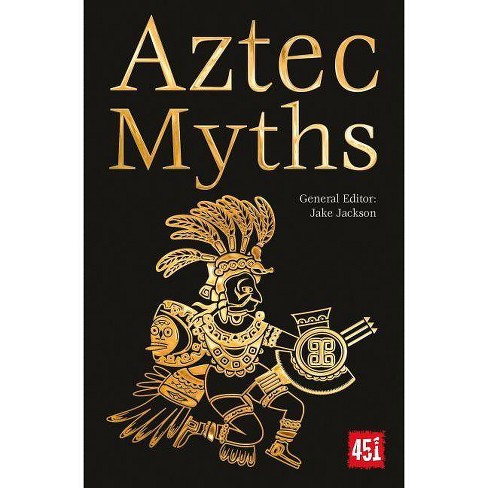 Like other Mesoamerican cultures, Aztec myths explained life and death by linking them to the earth, sky and sea in a grand cosmic scheme. This collection explores the history, gods, calendar and tales of this people, from the war god Huitzilopochtli to the supreme deity Tezcatlipoca; from migration legends to the origin myth of the Five Suns.

Though the Olmecs (1250-200 bc) were the first civilization in Mexico, the Aztecs (1325-1521) -Mesoamerica's last imperial civilization and the most significant of the militaristic post-Classic period - are probably who first come to mind when we think of great empires of that region. Like other Mesoamerican cultures, Aztec gods and myths reflected a natural philosophy where ideas concerning life and death were linked symbolically to the earth, sky and sea in a grand cosmic scheme. Their religion was dominated by the tribal war god Huitzilopochtli, the rain/fertility god Tlaloc and the supreme deity Tezcatlipoca, the Lord of the Smoking Mirror. This fascinating collection explores the history, culture, gods, calendar, myths and tales of this people, from migration legends to the origin myth of the Five Suns. FLAME TREE 451: From mystery to crime, supernatural to horror and myth, fantasy and science fiction, Flame Tree 451 offers a healthy diet of werewolves and mechanical men, blood-lusty vampires, dastardly villains, mad scientists, secret worlds, lost civilizations and escapist fantasies. Discover a storehouse of tales gathered specifically for the reader of the fantastic.

Jackson is General Editor of The World's Greatest Myths and Legends series, with titles including 'Myths of Babylon', 'Indian Myth', 'Egyptian Myth', 'Norse Myth' and 'Polynesian Island Myth'. He is editor of 'Myths and Legends' and foreword writer for 'Celtic Myths and Tales'. Other related work includes articles on the Philosophy of Time, 'Macbeth, A Gothic Chaos' and William Blake's use of mythology in his visionary literature.
If the item details above aren’t accurate or complete, we want to know about it. Report incorrect product info.