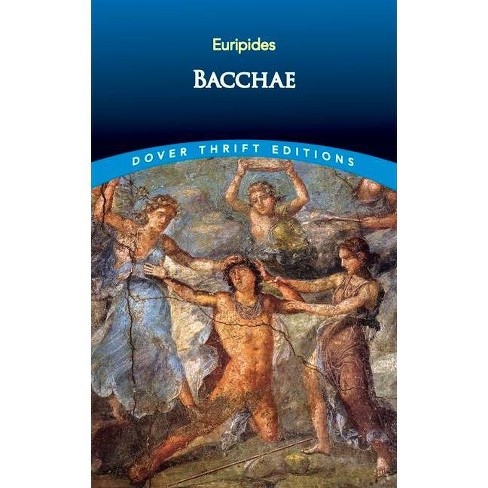 Classic Greek tragedy concerns the catastrophe that ensues when the King of Thebes imprisons Dionysus and attempts to suppress his cult. Striking scenes, frenzied emotion, and choral songs of power and beauty.

The youngest of the three great Greek tragedians, following Aeschylus and Sophocles, Euripides (ca. 484-406 B.C.) is reputed to have written ninety-two plays, nineteen of which survive. The Bacchae, a late play staged posthumously, concerns the cult of Dionysus, god of wine, whose worship hinged largely on orgiastic and frenzied nature rites.
When Dionysus (in disguise) attempts to spread his cult among the people (especially the women) of Thebes, their king, Pentheus, imprisons Dionysus and tries to suppress his cult. The king's misguided attempt to thwart the will of a god leads to catastrophe. Full of striking scenes, frenzied emotion, and choral songs of great power and beauty, the play is a fine example of Euripides' ability to exploit and manipulate traditional Greek myth to serve his own ends in probing man's psychological makeup and understanding of himself.