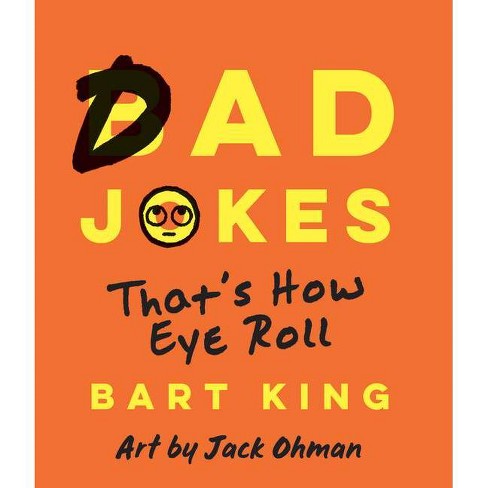 $14.99
new at target¬
no reviews yet
be the first!be the first! ratings
Release Date: coming soon!
Preorder for
Edit zip
Ships by release date with free standard shipping using RedCard
Help us improve this page

A goofy book celebrating the Dad Joke lifestyle -- packed with jokes and wordplay for your favorite punster.

Bad Dad Jokes covers every aspect of the most simultaneously loathed and beloved joke form of all time: the pun. Because "Dad Humor" should be practiced by everyone (regardless of age, gender, or family status) this book serves to encourage creative thinking and punning habits for everyone! Learn how to properly deliver a pun (whether written, visual, or verbal) and how to pretend you're sorry for your Dad Joke (even when you're not). Includes: quality pre-loaded puns, the taxonomy of the different types of wordplay, famous punsters, and Great Moments in Dad Joke History.

Bart King is one of America's top 100 Barts. As a child, he grew fascinated with puns after learning that William Pitt the Younger (1759-1806) was so thin, he was nicknamed "The Bottomless Pitt." A longtime teacher, King has also written more than twenty-five books (including The Big Book of Boy Stuff, The Big Book of Spy Stuff, and The Pocket Guide to Mischief), and is the winner of the 2019 Bulwer Lytton Fiction Contest Vile Pun award. He had intended to illustrate this book himself, but after drawing a blank, Bart was lucky to enlist the expert assistance of Jack Ohman.

Jack Ohman is the editorial cartoonist and Associate Editor at the Sacramento Bee. Ohman was a finalist for the Pulitzer Prize in 2012, and won the 2016 Pulitzer Prize for editorial cartooning. He has published ten books, many on the subject of fly fishing, inexplicably. Ohman has also won the Robert F. Kennedy Journalism Award, and virtually every other American journalism prize. It doesn't go to his head, much. He has three children, two of whom were students of Bart King, whom they still call Mr. King.