Bad Kitty Goes to the Vet - by Nick Bruel (Paperback) 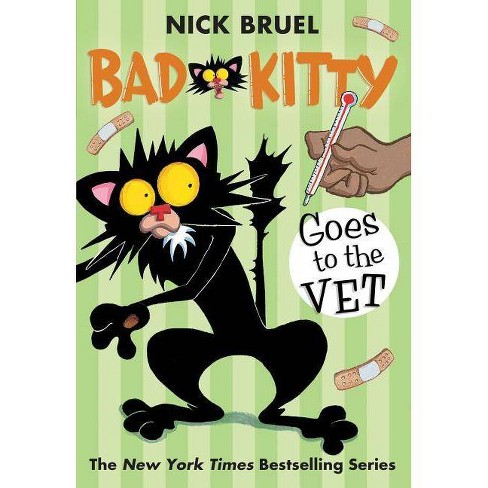 When Kitty is happy and healthy, everything is perfect. She jumps around, eats everything in sight and has the energy to keep slobbering puppies in their place. But when she's sick, all she can do is lie in her bed. Looks like it's time for this sick kitty to go... to the vet.

When Kitty's family finally manages to get their clawing, angry pet into the doctor's office, it's a wild adventure for Kitty who has to get the most dreaded thing of all...a shot. Once administered, Kitty is cast into an ingenious dream within a dream sequence in which she has to make right by puppy or risk being shut out of PussyCat heaven forever. Bad Kitty Goes to the Vet, the 9th installment of the popular Bad Kitty series by Nick Bruel is chock full of brilliant supporting characters and of course, the crankiest bad kitty you've ever seen.

The illustrations are a delightful addition to a hilarious text and add charm and wit to an already beloved character. . . . Die-hard fans of this naughty feline will love this new story, and newcomers will be in for a treat. Even the most reluctant reader will have trouble putting this one down. --School Library Journal

Nick Bruel is the author and illustrator of the phenomenally successful Bad Kitty series, including the 2012 and 2013 CBC Children's Choice Book Award winners Bad Kitty Meets the Baby and Bad Kitty for President. He has also written and illustrated popular picture books including Who is Melvin Bubble? and Bob and Otto. Nick lives with his wife and daughter in Westchester, New York.
If the item details above aren’t accurate or complete, we want to know about it. Report incorrect product info.