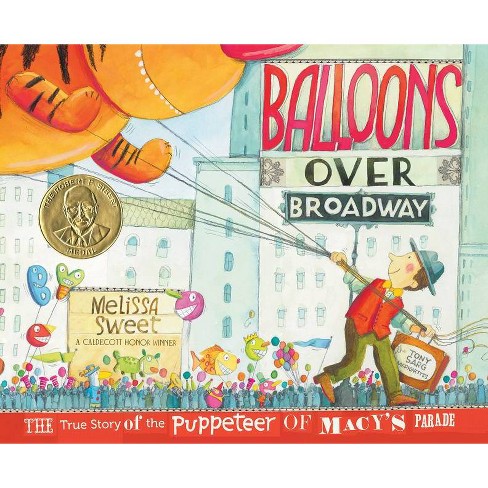 In brilliant collage illustrations, the award-winning artist Sweet tells the story of the puppeteer Tony Sarg, capturing his genius, his dedication, his zest for play, and his long-lasting gift to America--the inspired helium balloons that would become the trademark of Macy's Thanksgiving Day Parade. Full color.

Meet the master puppeteer who invented the first balloons for the Macy's Thanksgiving Day Parade. Melissa Sweet brings to life the inspirational story of the puppeteer who invented the giant balloons floating in the sky during the annual parade celebrating Thanksgiving. The Caldecott Honor artist brilliantly captures the essence of Tony Sarg, a self-taught immigrant with a fascinating imagination.

The collage illustrations coupled with Sweet's storytelling portray Sarg's joy in his childhood inventions and his ingenious balloon creations that still bring delight to viewers around the country. This nonfiction illustrated book will capture the hearts of all ages.

"Sweet's brilliant combination of collage, design, illustration and text give Balloons Over Broadway an amazing richness. [No one] will ever see the parade in the same way." -- New York Times Book Review

Sweet tells this slice of American history well, conveying both Sarg's enthusiasm and joy in his work as well as the drama and excitement of the parade. This one should float off the shelves. -- School Library Journal (starred review)

"Tony Sarg, the man who invented the giant balloons of the Macy's Thanksgiving Day Parade, has found a worthy biographer in Caldecott Honoree Sweet. The rush that comes from inspiration, the cliffhanger moments of creation, the sheer joy of building something and watching it delight the multitudes--Sweet captures it all in what is truly a story for all ages. -- Publishers Weekly (starred review)

Sweet's whimsical mixed-media collages, embellished with little dolls she made herself out of odds and ends, reinforce the theme that, for Sarg, work was play. -- Horn Book (starred review)

"A joyous piece of nonfiction that informs and delights in equal parts." -- Booklist (starred review)

"It's a history lesson, inventor's sketchbook, and inspirational story all rolled into one marvelous mixed-media masterpiece. Sweet's beautifully rendered true-life tale will have your child's imagination soaring to new heights!" -- Education.com

Like Tony Sarg, Melissa Sweet loved to figure out how to make things move as a child. (She even remembers taking apart her own marionettes to see how they worked!) Today, she still plays with simple materials to construct her brilliant mixed-media collage illustrations, for which she has won a Caldecott Honor and two New York Times Best Illustrated citations. About this book, she writes:  As I began to research Tony Sarg, I was especially curious how he went from illustration and puppetry to designing the huge parade balloons. After I spent five years reading everything I could find on him, the Macy's parade, and puppetry--then traveling all over the map to talk to puppeteers--it seemed incredible that so few people knew of his work. I found him so inspiring, I wanted the whole world to know his story. For more information about the author and her work, visit www.melissasweet.net.

Thanksgiving in the Woods - by Phyllis Alsdurf (Hardcover)

Star of the Party: The Solar System Celebrates! - by Jan Carr

Vincent and Theo - by Deborah Heiligman

The Mitten by Jan Brett

5 out of 5 stars
Would recommend
Jenn - 1 year ago, Verified purchaser
Bought this book for my three kids to read, and they loved it. We watch the parade every year, and this year meant so much more now that they understand why we have this tradition.
Did you find this review helpful?

4 out of 5 stars
Would recommend
Eah - 1 year ago, Verified purchaser
Great book to do with 2nd graders before creating our own “Balloons Over Broadway” stem project. Illustrations are fantastic.
Did you find this review helpful?

5 out of 5 stars
Would recommend
- 1 year ago, Verified purchaser
Perfect story about the history of the Macy’s Thanksgiving Day Parade!
Did you find this review helpful?