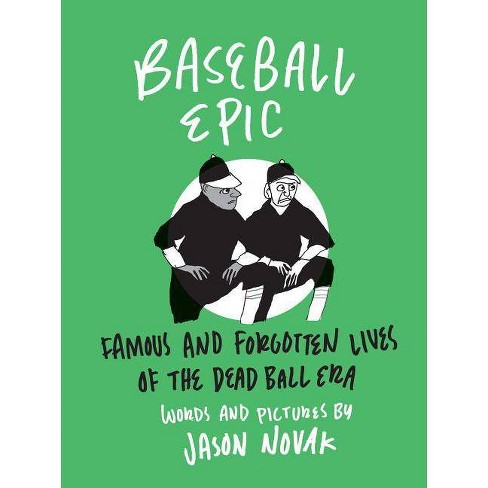 $11.99
MSRP$16.95
no reviews yet
be the first!be the first! ratings
Shipping
Free standard shipping with RedCard
Loading, please wait...
Help us improve this page

"The real work of the book is drawing attention to the black, Cuban, and Native American players despite horrible racism. . . . Novak's handles their stories with care and Baseball Epic is a wonderful entrant because of it." --The A.V. Club

"While flag-waving, replays, and statistical noise ruin the joy of contemporary baseball, Jason Novak has written and illustrated a Gorey-esque history of the dead-ball era that is delightfully morbid, intriguing, and a hell of a lot of fun. And maybe best of all, Novak's magic comes from stories rather than numbers." --Josh Ostergaard

"Jason Novak's graphic essay bridges the mundane, the dangerous, and the divine in the era of the dead ball. We see the fingers of fate upon each of Novak's ball players. Plays add up. Sacrifices add up and conclude mostly off the field. Jim Shaw had multiple scrapes with death until he shot himself hunting rabbits. Ditto Bill Hobbs. Ditto Charlie Armbruster. Chief Johnson was shot dead over a dice game. Benny Kauff wore his celebrity casually. Cheeky clothes likely led to his rigging the 1919 World Series. Baseball Epic offers subtle, harsh, but sweet images of the men and women who played for the love of the game." --LeAnne Howe

"Novak provides a window into the personalities and untold histories of the sport." --Vol. 1 Brooklyn

"This sometimes funny, sometimes sad book will enchant any baseball fan and also serves as a window into a period of American history that most of us know too little about. I can hardly wait to get my hands on this treasure." --David Unowsky

"A witty and delightfully morbid book that will make you wonder why on earth anyone would want to be a Roman Emperor." --Mike Duncan, best-selling author of The Storm Before the Storm

"This twisted and fantastically illustrated survey of the brutal fate of every Roman Emperor is a strong reminder to study history--because we sure as hell don't want to repeat it." --Wendy MacNaughton, best-selling author of Pen & Ink