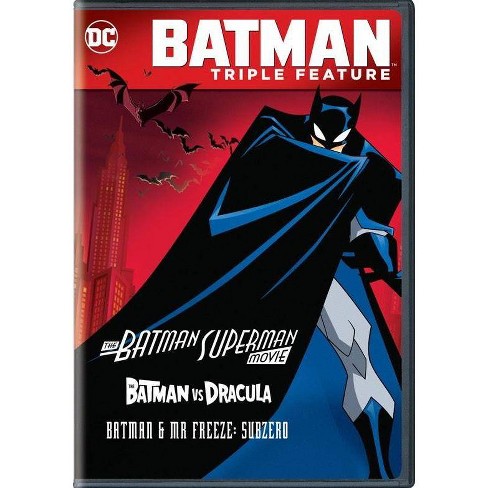 $9.99
MSRP$14.97
undefined out of 5 stars with 0 reviews
be the first!be the first! ratings
Help us improve this page

Batman & Mr. Freeze: Sub Zero: This breathtaking adventure explodes into animated action when the villainous Mr. Freeze kidnaps Batgirl. Now, racing the clock, Batman and Robin face off against Mr. Freeze in the iciest showdown of the century.

Batman vs. Dracula: Gotham City is terrorized not only by recent escapees Joker and Penguin, but by the original creature of the night, Dracula! Can Batman stop the ruthless vampire before he turns everyone in the city, including The Caped Crusader, Joker and Penguin, into his mindless minions?

Batman/Superman Movie, The When the Joker elicits the help of Lex Luthor in a new fiendish scheme, only the combined superpowers of Batman and Superman can save Metropolis. Will the Man of Steel and the Caped Crusader be able to foil the plot of this diabolical duo? Not if the superheroes' alter egos clash as they vie for the attention of the self-reliant Lois. Watch the action explode as Batman and Superman clash with each other and their notorious archenemies.